…. Faults Allegations of Coup
… Weapons Ordered During his tenure being Used Against Boko Haram 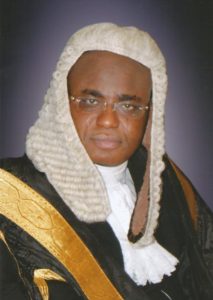 A Senior Advocate of Nigeria (SAN), Alhaji Ahmed Raji has counselled the Federal Government of Nigeria on the need to respect and obey the judgment of the Economic Community of West African States Court of Justice which on Tuesday ordered the release of former National Security Adviser (NSA) Col. Sambo Dasuki from detention.
Dasuki who has been in the custody of the federal government since December last year got reprieve from the regional court which also imposed a fine of N15m on government for illegal and arbitrary detention of the applicant.
Raji who spoke in a media-chat in Abuja said that Nigeria as a respected member of ECOWAS and the International Community is expected to honour its obligations to the protocols establishing the court by complying with its order.
The senior lawyer said that the spirit invoked in the acceptance of the decision of the International Court of Justice (ICJ) on the disputed oil rich Bakassi Land must be rekindled in the decision of the ECOWAS Court.
Raji explained that ECOWAS Court was not a domestic court, its sitting in Nigeria notwithstanding, adding that complying with the order of the court will further boost the confidence of the International Investors to invest in the country where the rule of law prevails.
The SAN warned that should the federal government turn deaf ears to the regional court verdict, foreign investors would be wary of doing business with the country not to talk of coming down to establish business ventures.
“I am appealing to President Muhammadu Buhari to facilitate immediate compliance with the ECOWAS Court decision. I am also appealing to the Presidential aides especially the Chief Law Officer of the Federation Mallam Abubakar Malami SAN and the heads of the intelligence units to advise the President properly.
“The order of the court cannot be ridiculed and Nigeria, as a democratic nation, cannot afford to ridicule the court order in the interest of the corporate image of the country.”
The senior lawyer expressed happiness that the allegation of coup plot and waging war against Nigerians brought against Dasuki at the court by government to justify his unlawful detention was not sustained since Dasuki is not facing treason charge in anywhere in the country.
Besides, Raji also said that the allegation of non purchase of arms and ammunition against Dasuki had not been substantiated because the records were there that several towns and local governments were liberated from the Boko Harram in the North Eastern part of the country during Dasuki’s tenure.
“In fact, records are there that some of the ammunitions being used by the current government were parts of those ordered during the regime of the former NSA according to information he made available to his legal team”.
“It is under the leadership of Dasuki as NSA that the country security forces liberated several towns and cities under Boko Haram in Adamawa, Yobe and Borno”, the lawyer said.
At any rate, the golden rule is that when matters are pending in court, they become subjudice and nobody is allowed to make comment in such a way that will suggest that the roles and functions of courts are being usurped.
Answering a question, the counsel said that the Dasuki’s legal team does not need to serve copies of the ECOWAS Court judgment on the federal government before the verdict can be obeyed since the government was adequately represented throughout the proceedings.
“The fact is that lawyers standing for a party in a matter have duty to obtain copies of the court judgment and advise their clients accordingly”.
“In the case at hand, ECOWAS Court is not a court of first instance or intermediate court, it is only and final court and Nigeria must submit to the jurisdiction of the court.”
By PRNigeria
PRNigeria encourages institutions to be transparent in their information management as it provides news items from authoritative sources for free use by the media