Home Security The Army-Police War: Where Is the NSA? 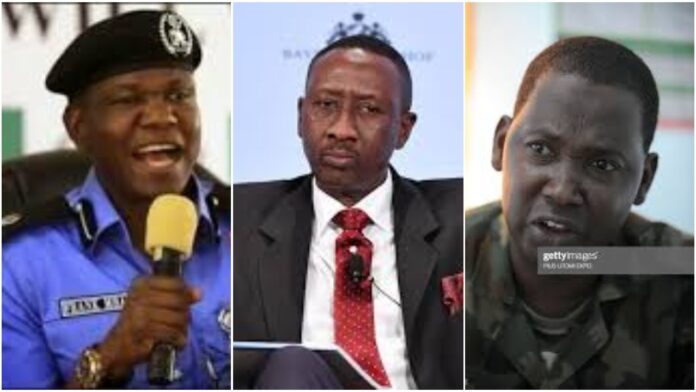 The Army-Police War: Where Is the NSA?
By Yushau A. Shuaib

The current Director-General of the Department of State Services (DSS), Yusuf Bichi Magaji made the above remarks in his keynote address, while hosting the meeting of the Forum of Spokespersons of Security and Response Agencies (FOSSRA) on April 24.

The Forum was established in 2013 by the Office of the National Security Adviser (ONSA) to enhance synergy and collaboration amongst critical institutions that deal with issues of security and its challenges in Nigeria.

As a sensitive security organ, the ONSA is statutorily empowered to coordinate the activities of military, security, intelligence and response agencies in combating terrorism, cybercrime and major issues affecting the wellbeing of the state in Nigeria. It is a known fact that during the previous administration, the ONSA hosted regular meetings of security and service chiefs in addressing issues that could create conflict in society.

While the meeting of the security chiefs was held almost every other week in ONSA, the meeting of FOSSRA was held rotationally among member-agencies every month until June 2015.

It is of utmost importance to highlight some instances when FOSSRA’s interventions doused tension and stabilised the polity within a climate of heightened agitations and security concerns in the country.

In June 2014, the then National Security Adviser, Sambo Dasuki officially tendered an apology to the Speaker of the House of Representatives, Honourable Aminu Tambuwal, who was allegedly harassed by joint-security operatives at an international summit on Farmer-Herder Crisis in Kaduna. Both the former NSA and Speaker are from the same royal family within the Sokoto sultanate, even if of different statuses. (Link: http://bit.ly/31HNERy)

Similarly, in one of the Army-Shi’ite altercations in Zaria, also in July 2014, during which some members and children of Sheikh Ibrahim Zakzaky  were killed by Nigerian soldiers, the Chairman of FOSSRA, who was then the Director of Defence Information, General Chris Olukolade, promptly issued an empathic statement, expressing regret over the incident and announcing that a panel would be constituted to unravel the remote causes of the fracas. The statement played a magical role in nipping the controversy in the bud. (Link: http://bit.ly/2TycxMD)

The following month, the Commandant General of the Nigeria Security and Civil Defence Corps (NSCDC) and two operatives of the Corps were allegedly disrespected and manhandled on different occasions by the Police. As the media were feasting on the controversy, the then spokesperson of the Nigerian Customs Service, Wale Adeniyi hosted the monthly meeting of FOSSRA in September 2014, where the erstwhile Police spokesperson, Emmanuel Ojukwu walked to the NSCDC spokesperson, Emmanuel Okeh and issued a joint statement which doused the tension. (Link: http://bit.ly/31G3eNg)

Meanwhile, since the appointment of Major General Babagana Monguno (Rtd) as the National Security Adviser (NSA) by President Muhammad Buhari in 2015, he has neither shown keen commitment to nor hosted the meeting of the FOSSRA to guard against inter-agency rivalry. The meeting of the Forum, which has become occasional, is now being hosted by the Centre for Crisis Communication (CCC) and other security agencies that value synergy and collaboration in information management.

If FOSSRA, which is domiciled under the ONSA, is very active, the current acrimony between the Nigerian Army and the police over the killing of the Police’s Intelligence Response Team (IRT) operatives by soldiers in Taraba State could have been averted. There would most likely have been an existing synergy and a more cordial relationship between these two prominent actors within the Nigerian security architecture and system.

It was alleged that soldiers of the 93 Battalion shot the IRT operatives – including Inspector Mark Ediale, Sergeant Usman Danzumi, and Sergeant Dahiru Musa – dead after they had arrested a notorious kidnap kingpin, Hamisu Bala Wadume, who is now on the run. The Army claims that the police officers were shot after being mistaken for “suspected kidnappers” and blames the attack on a communication gap.

The initial statement from the Police spokesperson, DCP Frank Mba and immediate response by the Army spokesperson, Colonel Sagir Musa, would have been needless if an effective mechanism of inter-agency collaboration, as exemplified by FOSSRA, had been adhered to.

There are trending videos, audios and sponsored stories on the fracas that need to be contained before they further exacerbate the present situation and persist as drivers of tension. It is quite unfortunate that many Nigerians on the social and mainstream media have continued to react to the incident through inciting, inflammatory and embarrassing innuendoes.

It may not be surprising if the two public relations officers of the security organs involved were actually taking orders from their principals, rather than abiding by the ethics of crisis communication management, which guide professionals on their temperament, conduct and how to shape their messages during periods of high volatility.

As spokespersons of security agencies, they are expected to be courteous, restrained and conscious of the need to show great human understanding and empathy in their public communications, at this sort of time when such really matters. It is also very important that their messages, like press releases, should be clear, concise, concrete, correct and complete, without allowing for any form of ambiguity in communication.

In all these, the absence of strategic leadership in dousing the tension, beyond the critical levels of the individual service chiefs, merely escalates the inter-agency antagonism and fuels the heated debates and fury pervading the media from visible and anonymous sources.

As the coordinating organ of government on security matters, ONSA should step in and manage this crisis, more professionally and with experience, especially in the absence of a federal cabinet, as the Ministers of Defence or that of Interior are yet to be sworn in. The NSA can advise the Army Chief Lt General Tukuru Buratai and Police Boss IG Mohammed Adamu on the need to urge their officers to exercise restraint. In the alternative, the Presidential Media Adviser should intervene by calling on the spokespersons of the agencies to sheath their swords in this attrition and highly unfortunate media war.

Yushau A. Shuaib
Author of An Encounter with the Spymaster
[email protected]