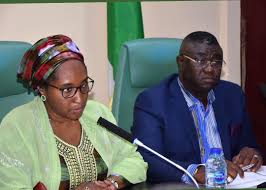 We will make CMD Center of Excellence –  Budget Miniter
Minister of State for Budget and National Planning, Prince Clem Ikanade Agba has stated that the Center for Management Development (CMD) will be given a facelift to become a world class center of excellence.
Prince Agba stated this over the during a familiarisation visit of the CMD, centres in Abuja and Lagos , a parastatal under his Ministry.
Reacting to the level of infrastructural decay in the CMD, the Minister said, ” I have seen the infrastructure and I am not too happy about it. We have to do all that we can to change the narrative, because lamentation will not help. We have to start taking those steps gradually”
He described the deficit in the agency’s infrastructure and  staff capacity gaps as a hinderance to the agency in achieving it’s set goals
While expressing his displeasure with the level of infrastructural decay in the agency, Prince Agba also encouraged the management and staff of the institute to device ways and means they could improve their revenue generation so that they will be in a better economic condition,  to be able to give the centre a deserved  facelift.
Accordingly, the Minister expressed hope for an improved economy in the new development plan which his ministry has already started the development process, stating that the national steering committee for the new plan would be inaugurated in March this year
On the govt short term plan ERGP, which is coming to a close this year, Agba explained that it’s review is currently ongoing  to accertain what has worked well and what did not so that the area that needs re-inforcement would be attended to and for the ones that did not work, to find out why and then see how to improve on them.
“It has to go beyond the ERGP, we are looking at very old plans that we have had before. We already asking the MDAs to review their sector plans and we are currently receiving them with a view to consolidating them and giving them to the technical working committe to work on” he said
Earlier in his remarks, the Acting Director General of CMD, Bitrus Chinoko, told the Minister that lack of capacity building for staff is one of the reasons the centre found it difficult to meet it’s set goals and objectives
Chinoko explained that, it is the  greatest desire of the agency  to look forward to a world class centre for excellence, and pointed out that, that can only be achieved with good infrastructure and highly skilled staff
Meanwhile, the staff, during an interactive session with the Minister, expressed the need for regular trainings and capacity building for staff in order to uplift the center to a world class status
They called for the confirmation of the Acting DG to enable him further consolidate with the tremendous changes he brought to the center since he came on board
They also assured the Minister that CMD would deliver it’s mandate optimally if necessary support is given, pointing out that majority of the staff made personal efforts to develop themselves with necessary knowledge in order to deliver their duties
CMD is a government agency saddled with the responsibilities of regulation of standards, development of managerial manpower for the country and a broad range of skills to enhance the quality of management and leadership for the attainment of national economic goals.
Signed:
Victoria Agba-Attah