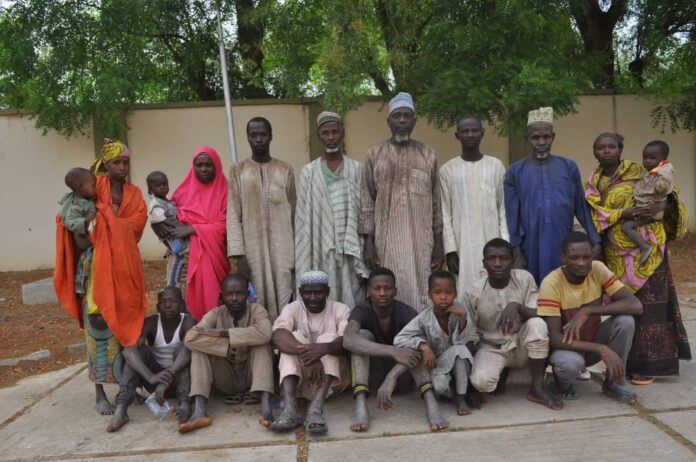 1.​ Troops of Operation HADARIN DAJI in Zamfara State in a ground and air operation closed up on bandits in a subsidiary operation called Operation CHINGABA along Maru-Dansadau axis. During the operation, 9 bandits were neutralized, while Ten men, Four women and Four minors who were kidnapped by the bandits were rescued.

2. In a similar development, following credible information, troops on 11 Apr 2020 in a sting operation at Isah Road close to Sarwa Village in Isah LGA Sokoto State, arrested a gun runner known as Alhaji. At the point of collection his men in ambush opened fire on troops. He was neutralized and his men fled with various degrees of gunshot wounds. Troops recovered One GPMG PKT, One hundred and forty rounds of 12.7mm, fifty three blank ammunition and One motorcycle. In the same vein on 11 April 2020 Troops of FOB Dangulbi and Dansadau at a blocking force at Gobirawa made contact with bandits forcing them to withdraw in disarray. Troops pursued and neutralized one bandit, recovered one AK 47 rifle, three 7.62mm special ammunition, water jet explosives, 2 inches Det 33 cable for IED and One motorcycle.

3. Furthermore, following sustained action on the bandits in Mutunj and Dansadau in Maru LGA on 10 April 2020, the Village Head of Mutumji handed over one AK 47 rifle captured from bandits to troops at FOB Dansadau.

4. The Armed Forces of Nigeria hereby solicit for continuous provision of information for the enhancement of our operations. This is highly desirable in tackling our security challenges.