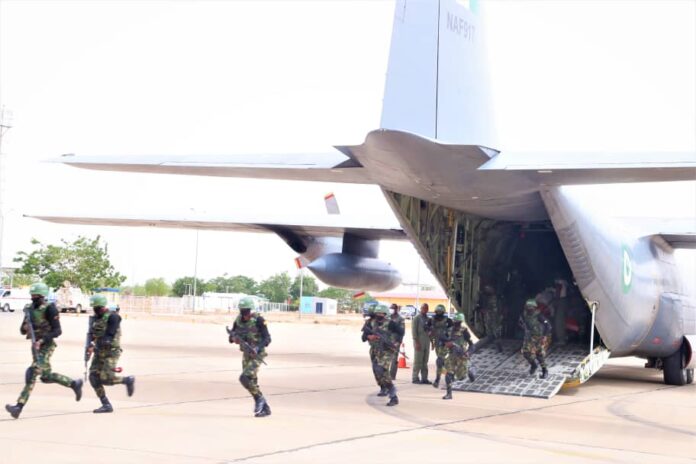 In furtherance of President Muhammadu Buhari’s directive on the launch of a major crackdown against bandits, kidnappers and other criminal elements in Katsina and other States in the North West of the Country, the Nigerian Air Force (NAF) today, 22 May 2020, injected Special Forces (SF) operatives and deployed additional platforms to Katsina State. The arrangement is to consolidate on the already existing security architecture in the State in order to ensure the success of the ongoing renewed offensive against the armed bandits under the auspices of the Defence Headquarters (DHQ)-led Operation HADARIN DAJI.

In his address during the deployment, the Chief of the Air Staff (CAS), Air Marshal Sadique Abubakar, represented by the Air Officer Commanding Special Operations Command (AOC SOC), Air Vice Marshal (AVM) Charles Ohwo, stated that the deployment was informed by the need to quickly add value to the current effort by all security agencies to decisively deal with acts of banditry and criminality in Katsina State and the entire Northwestern Nigeria.

He disclosed that precursor air operations that commenced 2 days ago had already yielded positive results with some armed bandits’ camps destroyed, thereby further degrading the fighting capability of the criminals. He said the deployment of the additional SF operatives would complement the successes so far recorded to ensure the activities of bandits, kidnappers, cattle rustlers and other criminal elements are curtailed.

Speaking further, the representative of the CAS assured the good people of Kastina State that the NAF, working in synergy with sister Services and other security agencies, would continue to do its utmost to ensure a return to normalcy in the area. He also thanked the Executive Governor of the State, Governor Aminu Bello Masari, for his support and encouragement towards ensuring the success of the Operation. AVM Ohwo charged the troops to continue to uphold the NAF’s core values of ‘Integrity’, ‘Service before Self’, and ‘Excellence’ as they carry out their assigned tasks.

The Katsina deployment is coming just few days after the NAF had deployed SFs and Combat Search and Rescue operatives to Nasarawa and Plateau States.