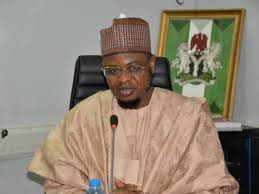 …Party Stands in Solidarity with Minister of Communications and Digital Economy

The Caretaker Chairman of the All Progressives Congress, APC, Gombe State Chapter, Mr. Nitte K. Amangal has condemned in strong terms, the sustained campaign of calumny against the Hon. Minister of Communications and Digital Economy, Dr. Isa Ali Ibrahim Pantami by some disgruntled and unpatriotic people.

In a statement on behalf of the entire APC family in Gombe state, the party chairman expressed the belief that the bad narratives against Pantami are being pushed by enemies of progress and the nation and therefore urged the Minister not to be deterred nor succumb to any form of blackmail.

He said, ” We commend the presidency and all the people of goodwill for coming out openly and boldly to defend the Minister against baseless accusations and attacks by individuals and organisations who do not mean well for Nigeria.

“We identify and stand in solidarity with our dear brother Dr. Pantami, who is a very dutiful and faithful member of our great party as well as an illustrious son of Gombe. We therefore request all well meaning party members to do so in the interest of our dear nation.

” We are very pleased and proud of the achievements recorded by Dr. Pantami in his stewardship as Federal cabinet member and believe that the smear campaign, which we are sure will not succeed, are not unconnected with the wonderful policies and reforms he has been carrying out in the ICT and digital economy sectors in the overall interest of the nation’s security and wellbeing”.