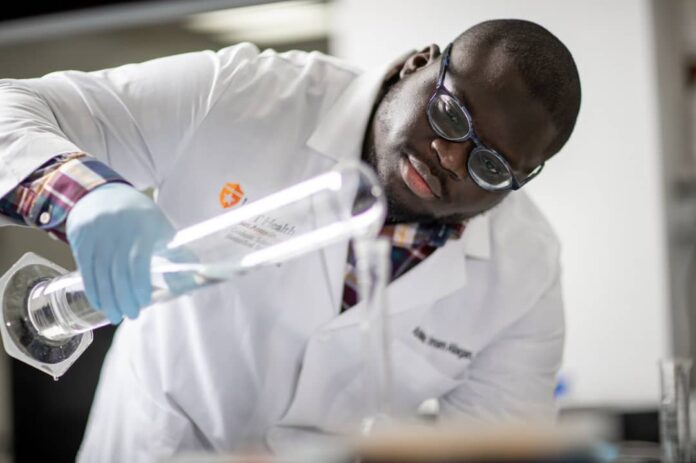 A Nigerian Qur’anic memorizer and scientist, AbdulHafiz Imam Aliagan at 27 years old, has obtained a PhD degree with Distinction in Biomedical Sciences from the University of Texas Health, at San Antonio.

One of the world’s premier biopharmaceutical companies, Pfizer has also offered him a place as a Senior Scientist in the Biomedicine Design team in Cambridge, Massachusetts.

Aliagan who got multiple scholarships in the course of his academic pursuit undertook his PhD in Integrated Biomedical Sciences with a speciality in Cell, Genetics & Molecular Medicine.

The university offers more than 65 degrees, the majority of them being graduate and professional degrees, in the biomedical and health sciences fields in an environment that involves more than 100 affiliated hospitals, clinics and health care facilities in South Texas.

Aliagan’s award-winning PhD research focuses on molecular mechanisms that underly the preferential degeneration of dopaminergic neurons, which are affected in Parkinson’s disease.

The dissertation also provides novel therapeutic target and options for the treatment and management of Parkinson’s disease in elderlies.

Parkinson’s disease is the second most common adult-onset neurodegenerative disease after Alzheimer’s disease.

Born on October 14, 1994, Dr Aliagan began his education as a home-schooled kid under the tutelage of his mother, Hajia Asiat Imam Aliagan. Encouraged by his performance at home, his father, Professor Abubakar Aliagan of the University of Ilorin expanded the home-school system to become a full-blown nursery, primary and high school, now known as An-nur Islamic Schools, Ilorin, Kwara.

Apart from memorizing the entire Holy Quran while in school, he obtained outstanding results in his WAEC and JAMB exams.