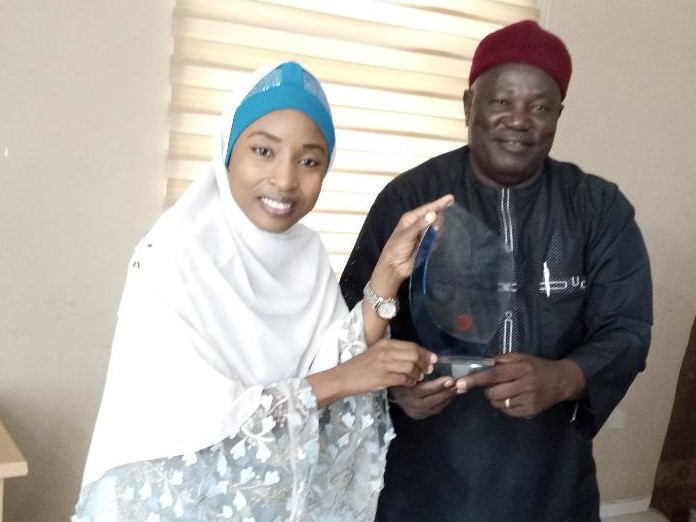 The Director News, Voice of Nigeria, Mr Ben Shemang has been honoured with an award by the Kalthum Foundation for Peace.

The Chairperson of the Foundation, Miss Kalthum Muhammed who presented the award in Abuja said; “The award was for excellence, recognition and Media support given to the foundation by VON Director of News.”

In his response, the Director News, Voice of Nigeria, Mr Ben Shemang said that “I feel great that the struggle to restore peace in the country has been recognized.”

According to him, since the foundation identified him, they have been working together in making sure that there is peace in Nigeria.

He mentioned some of the risks taken by the foundation in restoring peace in the country.

The Director Training, Voice of Nigeria, Hauwa Ajeje who gave the vote of thanks said that; “The award was well deserved as she appreciated the foundation for making North East proud.”

According to her, Kalthum Foundation for Peace is a Non-Governmental Organisation in North-East Nigeria.

Miss Muhammed noted that the foundation has received many awards in the past for its achievements in restoring peace and training women and youths to acquire skills in various fields of endeavour.

The Chairperson, Kalthum Foundation, said that; “The achievement would not have been possible without the support given by the media.”

The Management of VON was also in attendance during the presentation of the award.