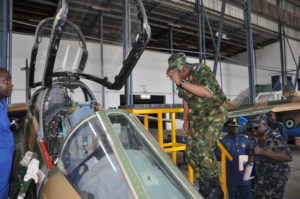 Two trailers suspected to be carrying logistics support to members of the Boko Haram Terrorist (BHT) sect have been intercepted and destroyed by the Nigerian Air Force Agusta helicopter on armed reconnaissance mission around the Nigeria-Cameroon border.

The trailers were covered and parked at different locations in the bush around the border town of Belel. The recent air operation against the BHTs was commanded by the Chief of the Air Staff (CAS), Air Marshal Sadique Abubakar from NAF reconnaissance aircraft, the King Air 350i. The CAS coordinated the various NAF platforms involved in the operation to provide close air support to ground forces, led by the Chief of the Army Staff, Lt Gen Tukur Buratai, as they advance from Dikwa to Gamboru Ngala.

Meanwhile, NAF 260, a Mi-24V attack helicopter was hit during the operation. One of the main rotor blades was hit and damaged however the pilot was able to successfully fly the helicopter back to base to land. The affected aircraft has since been repaired and is back to the theater of operation.
Air Commodore Dele Alonge
Director of Public Relations & Information
Nigerian Air Force