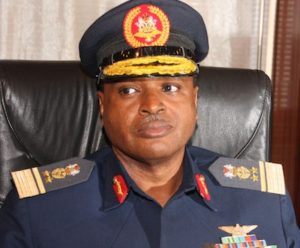 War on Terror: NAF Promotes Airmen to the rank of AWOs
As the military intensifies efforts in meeting the three-month presidential directive to end activities of Boko Haram in the North-east part of the country, ‎the Nigerian Air Force has promoted airmen as it promises to remain resolute in the fight for the unity and sovereignty of the country.
The Chief of Air Staff (CAS),  Air  Marshal Sadique‎ Abubakar gave the charge at the decoration ceremony of the newly promoted  Air Warrant Officers (AWO) in Abuja.
Abubakar charged the officers, especially the newly promoted, “on the sustenance of military ethic values and regimentation as NAF strives to achieve its current vision”.
According to him, the promoted officers are expected to provide leadership and guidance by virtue of experience and service knowledge as it affects administrative such as welfare, counselling and admonition of personnel.
He said: “The vantage position of AWO was a key figure in keeping the men on track towards the realisation of the current vision of the NAF especially in the aspect of discipline, core values and service delivery.
“I must use this medium to urge you all to see the present security challenges as one that must be overcome. The presidential mandate to terminate the activities of terrorists in our country is one that requires all hands on deck.”
“In the fight  for the unity of this country, we must remain resolute and defend the sovereignty and territory of our great nation. Your role in this war is very crucial.
“In this regard, the AWO is expected to show the best of example at all times for the sustenance of military ethics, values, tradition and regimentation‎,” the CAS added.
Speaking on behalf of the promoted officers, AWO Obi Francis assured the CAS that the confidence reposed on them would be sustained.
Other promoted officers include, Onyenaka‎ Nwuche, Ajolarune Alade, Balami Madalaa, Muhammad Madugu, Adekunle Agboke, and Jimoh Kabira.
By PRNigeria
PRNigeria encourages institutions to be transparent in their information management as it provides news items from authoritative sources for free use by the media