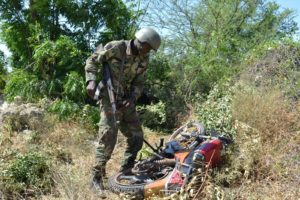 In efforts to continually dominate recovered territories and clear all Nigerian territory of Boko Haram vestiges, the advancing troops of 5 Brigade Task Group have today cleared 5 more terrorists camps at Hausari and Baranga in Marte Local Government Area of Borno State. The  troops during and encounter with Boko Haram terrorists at the camps killed 2 terrorists and recovered 2 Dane guns and a Double Barrel gun, while 12 motorcycles abandoned by some fleeing terrorists were destroyed. In addition, a suspected female member of the terrorists group was captured and is currently undergoing interrogation.
It will be recalled that troops of 5 Brigade had some time last month cleared and destroyed twenty terrorists camps at Kerenowa general area.
In a related development, troops of 28 Task Force  Brigade on patrol between Bitta – Yamteke in Borno State to block Boko Haram terrorists fleeing from Lagaran Fulani to enter sambisa forest, discovered 2 planted Improvised Explosive Devices (IEDs) and successfully detonated them.
We wish to state here that, while striving to stamp out terrorists from Nigerian territory, the troops remain committed to ensuring that they cleared and secure all known Boko Haram terrorists’ camps and enclaves  so that no terrorist infiltrates and return to any of the recovered areas.
Kindly disseminate this information to the public through your medium.
Thank you for your usual and kind cooperation.
Colonel Sani Kukasheka Usman Acting Director Army Public Relations