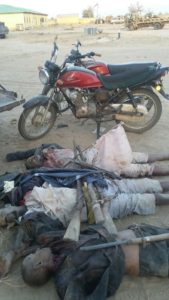 As part of their determined efforts to rid the society of all known Boko Haram terrorists enclaves and hideouts, troops of 25  Task Force Brigade based on tip off conducted a fighting patrol along Damboa-Njaba-Bale road in Borno State.
The troops encountered and killed 3 suspected Boko Haram terrorists that had been terrorizing the communities around Sabon Gari and Damboa. Among those killed was the Boko Haram terrorists Ameer (Leader) in Bulayaga. The Ameer was notorious in terrorizing Bale, Wass and Mufurundi villages.
The troops recovered an AK-47 rifle with its magazine,  43 rounds of 7.62mm Special Ammunition, 1 Grinding Machine and 5 Dane Guns. Other items recovered include 7 Motorcycles,21 bags of grains and 2 Boko Haram terrorists flags hoisted.
In a related development today, troops of 7 Division Garrison on patrol at Mainari village in Mafa Local Government Area had an encounter with Boko Haram terrorists. The encounter led to the killing of 9 terrorists and recovery of  weapons which includes 4 AK-47 and 1  Pump Action Gun
The patrol teams have continued to dominate the respective areas.
Kindly disseminate this information to the public through your medium.
Thank you for your usual and kind cooperation.
Colonel Sani Kukasheka Usman
Acting Director Army Public Relations
—
PRNigeria encourages institutions to be transparent in their information management as it provides news items from authoritative sources for free use by the media