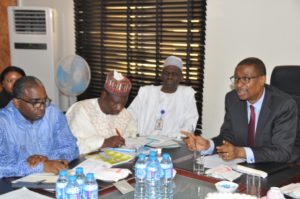 Minister of Industry, Trade and investment, Dr. Okechukwu Enelamah has implored Manufacturers in the country to show sympathy to policies of the present administration which has other competing national objectives to address within a shrinking national resources.

Dr. Enelamah was speaking this afternoon (25/1/16) when the executive officers of the Pharmaceutical Manufacturers Group of the Manufacturers Association of Nigeria (MAN) called on him.

“This government is out to encourage local manufacturers because they are key in industrial resurgence of Nigeria and will catalyze the job creation ambition of the Government adding that “things will get better if you understand what the government is doing to boast manufacturing”.

He said “ease of doing business in Nigeria” has been a worn out song of past administrations but that Buhari administration would stretch it further by applying serious sanctions on any establishment, be itprivate or public that either through act of omission or commission be a clog on the wheel of this policy.  Nigeria, he said, has stood long enough on the rhetoric, but its time to experience both motion and movement in our journey to economic emancipation.

The Minister informed the manufacturers that commercial banks fully understand the invaluable role they are expected to play to promote and encourage the manufacturing sector of the economy and that they must fulfill one of their mandates which is expanding the local market.

Earlier in the address delivered by the Chairman of the Group, Mr. Okey Akpa had told the Minister that the Group comprised more than 100 factories located nationwide with an estimated investment value of N500 billion.

The Group deplored the low level of patronage by Ministries, Departments and Agencies of Government “despite targets of the National Drug Policy and the domestic preference policy in Procurement Act 2007.

The Group stated that their situation was further compounded by practices that encourage donations of medicines largely imported in spite of Presidential directive since 2012 and the documented resolutions of the Executive Council of the Federation.

The Group recommended the retention and implementation of extant presidential Directives on patronage of Manufacturers (2012) and strict compliance with section 34 (vi) of the Public procurement Act 2007 on domestic Preference under the oversight of the Bureau of Public Procurement. They appealed to the government through the Minister to approve glass bottles, ampoules and vials imported by pharmaceutical manufacturers for foreign exchange.