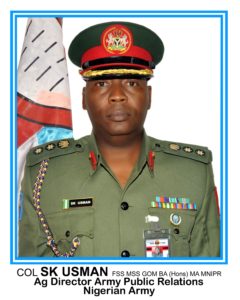 In recent days there were speculations in the media especially the online media, to the effect that Operation LAFIYA DOLE has been taken over by the Defence Headquarters and that soldiers are not happy about it. This is quite unfortunate and figment of imaginations of the respective media which was aimed at distracting the military, create rancour and disaffection among the components fighting Boko Haram terrorists.

Consequently, it is important to reiterate that since inception of the operation there has always been a hierarchy of command and control as indeed in all military operations. The Armed Forces Act (AFA), Cap A20, Laws of the Federation of Nigeria (LFN), 2004 in Section 7, clearly states the appointment of the Chief of Defence Staff (CDS) and his powers. He therefore exercises his powers in accordance with the appropriate statue books. He superintends over all the Services; Nigerian Army, Nigerian Navy and the Nigeria Air Force.

Therefore, the operation in the North East is not an exception.

On the other hand, the Chief of Army Staff (COAS) is responsible for all land operations and will continue to exercise that role and as may be directed by the President, Commander-in-Chief of the Armed Forces of the Federal Republic of Nigeria through the Honourable Minister of Defence, the CDS or directly to the COAS as the case may be. Operation LAFIYA DOLE is essentially Land and Air operation. The Nigerian Army has the largest troops deployed and therefore the COAS has the responsibility for the operational, command, control and discipline of the Army. This the COAS will continue to exercise by himself or can delegate through his field commanders.

The recent unfortunate attacks by Boko Haram terrorists on communities close to Maiduguri, despite our successes calls for concern. To this end the Nigerian Army has already commenced investigation into the attacks. All those found wanting will be dealt with in accordance with the Armed Forces Act. A standing Special Court Martial in the North East has already been established by the Nigerian Army. All cases of indiscipline and related acts of misconduct including human rights abuse in the operations will be tried by the this Special Court Martial.

The public and indeed Nigerians are hereby requested to disregard rumours and speculations on the alleged take over of the command and control of Operation LAFIYA DOLE and continue to support the fight against terrorism and insurgency.