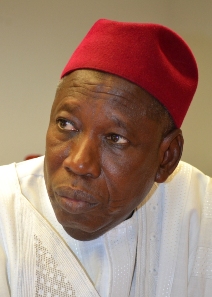 Kano state governor, Dr. Abdullahi Umar Ganduje has said that communal security is a collective security which must not be treated with levity.
He maintained that security agencies cannot work well without cooperation and timely release of information from the public, saying every community member has a role to play in marinating law and order.

The governor, who stated this while receiving executive members of the state Chairman, Police Community Relations Committee, PCRC described community policing as the key to addressing emerging security problems in the state and the country at large.

Governor Ganduje noted that his administration has been working with the Police, the Army and vigilantes to address security problems such as cattle rustling and drug trafficking, pointing out that success is being recorded because of the support of community members.

He promised to collaborate with the state PCRC to stimulate more community interest in security matters so as to make the state safe for businesses and other social endeavors to thrive.

On his part, the state Chairman, Police Community Relations Committee, PCRC, Alh. Bala Borodo, explained that the committee is a platform for collaborative effort between communities and the Police to combat crime.

Alh. Borodo, a one-time Minister of Steel, told the governor that the national secretariat of the committee intends to hold a two-day national conference to build capacity of members for enhanced problem solving and to keep them abreast of recent trends in terrorism and how to address them.

Meanwhile, Governor Ganduje has promised to support the International Hausa Language Literature Writers Forum towards preserving and promoting Hausa culture.
He said noted that like Yoruba and Ibo, Hausa language is facing serious threats as a result of incursion by alien cultures pointing out that concerted efforts must be made to preserve the language.

In his remarks, the leader of the delegation, Alh. Ado Ahmad Gidan Dabino told the governor that the group, which comprises 15 associations, intends to hold an international conference in Kano soon. He requested the assistance of the state government towards successful hosting of the conference.