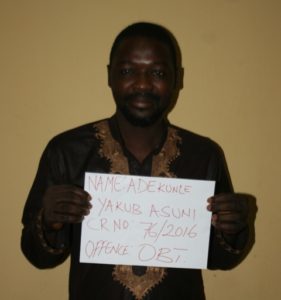 The Economic and Financial Crimes Commission, EFCC, on Monday 11 April, 2016 arraigned one Adekunle Yakub Asuni before Justice. I.B. Gafai of the Federal High Court Awka, Anambra State on a four count charge for attempting to steal the sum of N7,000,000.00 (Seven million naira) by false pretence, from the account of one Abdullahi Adamu. The offence contravenes the provisions of section 8 (b) of the Advance Fee Fraud and Other Related Offences Act. 2006.
The accused person pleaded not guilty on all counts of the charge preferred against him by the EFCC, while the prosecuting counsel Musa Gwani prayed the court to fix a trial date and remand the accused person in prison custody.
But the defense counsel Kennedy Ikuka pleaded with the court to grant the accused person bail on the ground that the offence was a bailable one.
One of the counts read:
“That you Adekunle Yakub Asuni on the 4th of March, 2016 at Akwa within the jurisdiction of the Federal High Court of Nigeria attempted to induce Access Bank Plc to deliver/transfer the sum of N7,000.000.00 (Seven Million Naria) from account No, 0046119649 in the name of Abdullahi Adamu to account No, 0020220860 belonging to Salisu Abubakar on the pretext that you are Abdullahi Adamu, a claim you knew to be false and thereby committed an offence contrary to section 8(b) of the Advance Fee Fraud and Other Related Offences Act, 2006 and punishable under section 1(3)of the same Act”.
But before adjourning to May 25, 2016, Justice Gafai granted the accused bail in the following conditions: two sureties not below grade level 8 either in the employment of State or Federal government, must be resident in Awka, and both office and residential addresses dully verified by deputy court registrar.
Wilson Uwujaren
Head, Media & Publicity
11th April, 2016
PRNigeria encourages institutions to be transparent in their information management as it provides news items from authoritative sources for free use by the media