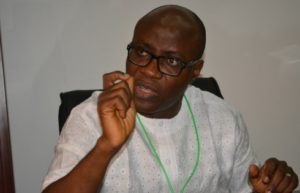 … EFCC to Aid Investigations and Prosecution of Culprits

The Federal Government has lost approximately $518 million to oil swap and Offshore Processing Agreements (OPA) in 2013 due to inefficiencies by the Nigerian National Petroleum Corporation (NNPC) and its subsidiaries, the Economic Confidential can authoritatively report.

The Economic and Financial Crimes Commission (EFCC) would soon be involved in investigating and prosecuting major culprits for appropriate sanctions over the revenue losses.

The Executive Secretary of the Nigeria Extractive Industries Transparency Initiative (NEITI), Mr. Waziri Adio made the disclosures in an interview with the Economic Confidential, the intelligence magazine. He said the Federation lost $211.88m to crude for product SWAP, and $306.16m of OPA, totaling $518m. He added that the current administration has cancelled Swap and OPAs to promote transparency in the oil sector.

Mr. Adio who spoke on the backdrop of the just released 2013 Oil and Gas Industry Audit report noted that the Corporation and its subsidiaries also withheld some of the monies that are due to government.

“For instance they withheld $3.8bn and N358bn respectively. Now let us break it down this way. If you remember NNPC divested some of its interests in Shell Joint venture about 8 Oil Mining Leases(OMLs) to Nigeria Petroleum Development Company(NPDC), $1.29bn from NLNG; N354bn from unpaid domestic crude debt; N3.98bn from subsidy over-recovery in 2012 and N2.17bn from cash-call refunds,” he said.

Furthermore, he said the report discovered $4.7bn from theft and vandalism in 3 JVs—Shell, Agip and Chevron; and N20bn from not observing 90-day credit time value of money at 12%.

Speaking on the four assets under the Nigeria Agip Oil Company(NAOC) JV similarly divested. OMLs: 60, 61, 62, and 63, Adio noted that no valuation was done on those 4 OMLs; neither consideration paid, and yet oil was lifted on behalf of NPDC, not the Federation.

He said despite the fact that 12 OMLs in the Shell and Agip JVs divested to NPDC, and not fully paid for or not paid for at all, NAPIMS paid cash-calls on some of these OMLs, namely, $536m paid as cash call on the 4 OMLs from Agip JV, $389m refunded to NAPIMS, but refund not remitted to Federation, apart from an outstanding of $147.8m not paid at all.

“There are also Cash-calls also paid on some the divested OMLs from the Shell JV, which include $35.12m refunded to NAPIMS, but refund not remitted to Federation. Records from NAPIMS showed request for refund of $414,000 and N249, 272, 000 on OML 25 apart from request for refund of $2.17bn on OML 42. You can’t imagine that these requested refunds were not made as at close of audits”, he said.

“From the report we discovered that N1.3 trillion was processed as petroleum subsidies for 2013. This you can see is 34% higher than the N970b appropriated for fuel subsidies in 2013. A careful look at the figures reveal that it is 26% of the N4.98 trillion of 2013 federal budget; 30% higher than total budget for education, health, water, and SUREP in 2013 budget”, he said.

Adio further disclosed that NEITI is engaging the EFCC for further investigations and sanctions on the culprits. He said: “The NEITI Act criminalizes some behavior and even put sanctions either in terms of fines and jails terms or both but did not give us powers to prosecute. That is why we are engaging the EFCC. The Acting Chairman of EFCC has pledged to set up a joint investigative team from both sides to come together and look at possible infractions.”

Note: Economic Confidential is a sister publication of PRNigeria