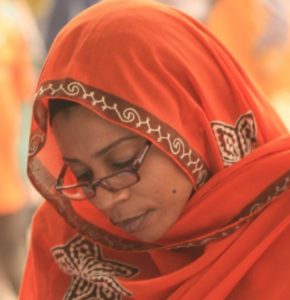 The Economic and Financial Crimes Commission (EFCC) has denied a report that it handcuffed and paraded Hajia Jamila Tangaza, a former chief executive officer of Abuja Information Management Systems (AGIS).

An EFCC’s source who pleaded anonymity disclosed that she voluntarily honoured the agency’s invitation to shed light on her activities while at FCTA when she was the head of AGIS.

There have been speculations on the social media claiming that “Jamilah Tangaza’s case with EFCC has unfortunately gone irredeemable and that she was handcuffed by EFCC to AGIS and some locations in Abuja.”

Some blogs even further claimed that “EFCC discovered and recovered over N1bn she stashed away in a bank in Nassarawa state with fake name, identity and other particulars but with her gsm number!”

Meanwhile the EFCC’s source who denied the report, told PRNigeria that “The EFCC is yet to complete its investigation and they cannot be responding to every social media speculation and gossip.

“As a fact she was never handcuffed or paraded in such dehumanising manner as being portrayed in the social media.

“EFCC is a responsible anti-graft agency that conducts diligent investigations without dehumanising our guests or suspects as the case may be. Suspects remain innocent until proven guilty by the court of competent jurisdiction,” the officer concluded.

Jamilah Tangaza was reported to have honoured EFCC’s invitation last week and granted an administrative bail. PRNigeria could not confirm if she met the conditions for the bail.

During the previous administration, Jamila had served as the Spokesperson to FCT Minister,Bala Mohammed before he appointed her the Executive Director of AGIS. She was former Head of Hausa Service of the British Broadcasting Corporation, BBC World Service. She had also worked as the BBC’s Abuja Editor, responsible for planning and organising the BBC’s output from Nigeria.

An alumni of Bayero University Kano and the London School of Economics and Political Science, she did her fellowship at the Oxford University and founded Community Skills and Acquisition Initiative (COSAI) – a non-profit voluntary organization in Nigeria which mainly seeks to provide access to vital information particularly to low-income and rural communities in Nigeria.