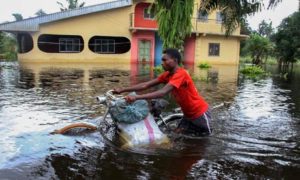 Niger State governor, Alhaji Abubakar Sani Bello has called for federal government quick intervention to address various ecological challenges devastating several communities in eight local government areas of the state.
The governor who made the call when he visited some communities ravaged by flood in Lapai Local government area of the state said the financial outlay to tackle ecological challenges is not only enormous but beyond the state, hence the call for federal government quick intervention.
Affected local government areas include, Lapai, Shiroro, Muyan, Gurara and Bida. Others are Lavun, Wushishi, Mokwa and Borgu.
He noted that these challenges range from sub-merging and washing away of houses, public schools, places of worship, farmlands, roads and bridges by flood and deep gully erosion in several communities in the state.
According to the governor, “solution to the ecological devastation is beyond the state government. I have spoken to the President about our challenges and the need for federal government intervention. I am still going to reach out to the federal government for intervention in tackling future re-occurrence.
“However as a government, we sympathized with the communities and we will give our support despite the leaned  resources of the state to reduce the hardship of our people. State Emergency Management Agency will come to the aid of the affected people.
This development, Gov. Sani Bello said has further strengthened the demand for the take-off of the Hydro-electric Power Producing Area Development Commission (HYPPADEC) to provide holistic solution to the perennial ecological problems facing the state.
At Muye town the governor directed the Lapai Local Government Chairman, Hon. Usman Achitupa to ensure that people living by the banks of River Gurara are relocated upland to avoid further flood disaster from the over flowing river.
The Emir Lapai, Alhaji Bago Tafida commended the prompt attention the governor accorded the plight of his people by visiting the affected communities.
Meanwhile four lives were lost in Lapai Local Government area at the weekend after an 8 hour downpour that sacked 23 villages and overran several farmlands.
Communities affected by flood disaster in Lapai Local government area include Cheku, Lambata kwaran, Cheppa, Alaba, Bina and Muye. Others are Ebbo, Egba, Gagbe, Tanna, Bazhi and Yelwa.
End.
Jibrin Baba Ndace
Chief Press Secretary