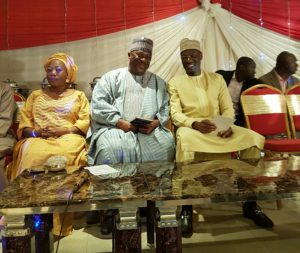 With poor revenue from the Federation Account, Kwara government has looked inward as it now realizes a sum of N1.5billion monthly from lnternally generated revenue (IGR) drive.

Governor AbdulFatah Ahmed disclosed this at the Annual Lecture of the Third-Estate Forum which held in llorin  Kwara State.

He said the state  Government had improved its revenue drive by blocking all revenue leakages to de-emphasis dependence in monthly allocation from the Federal Account.

The Governor said the state which was formally realizing N500m can now boast of N1.5billion monthly.

Ahmed  noted that the mono-economy being neglected  in the country had necessitated the present economy trauma being experience.

The governor explained that his administration had put mechanism in place through revenue generation to address the problems.

He said his administration was also taking conscious efforts to address salary problems in the local government councils  and tertiary institutions in the state.

He disclosed that government had concluded arrangement to cultivate 10,000 hectares of land for  rice, maize, cassava and soya beans production  across the 16 local government areas.

The President of Third Estate, Dr. Yusuf Lawal  said the deepening economy crisis remained the greatest worry to the club because the social value of the community was being threatened.

He said the club had been contributing its quota to community development through the renovation of schools, water projects and support to indigent students.

Guest speakers at the event, Engr. Tunde Yusuf, an industrialist; Tunde Salami, bank executive and  Mr Ibrahim Adebayo, a Director in Public service decried extreme level of poverty in the country which they attributed to consumption without production.

The speakers jointly agreed on the need for harnessing the potential of Agriculture and urged governments at all levels to provide enabling environment for private investments to flourish.

They emphasized the need for Nigeria to tap most of its un-tapped resources and develop entrepreneurship and self-employment to rescue the nation from economic recession.

Digital Identity and the Verity of Nigeria’s September 16 Revolution