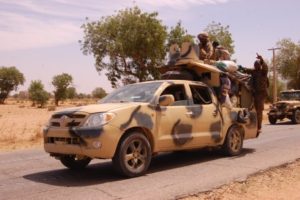 Troops of Operation LAFIYA DOLE  Task Force Battle Group  and Multinational Joint Task Force presently harbouring in Abadam village dealt decisively with elements of Boko Haram that attempted to attack on their location. The attack which was launched by the terrorist group at about 6:30 am today, Thursday 22nd September 2016 and it lasted for about 2 hours.

During the fierce battle, the troops killed 15 of the insurgents, with many escaping with gunshot wounds.

Sadly however 2 soldiers paid the supreme price in action while 4 others were wounded in action.  The bodies of our late colleagues and the wounded have since been evacuated.

The troops have continued mop up and clearance operations of the remnants of the terrorists. They have also  intensified vigilance and high level of alertness.

We shall oblige you with photographs later.