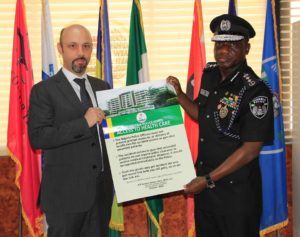 The Head of Delegation of International Committee of Red Cross (ICRC) to Nigeria Mr. Eloi Fillion and Mr. Pietro Rosario Till, The regional police and security Forces delegate Lake Chad region paid a courtesy visit to the Inspector General of Police on 20-01-2017 at the Force Headquarters, Abuja to intimate the IGP on the activities of Red cross in Nigeria particularly in north east.

The Inspector General of Police IGP Ibrahim K. Idris NPM, mni, while receiving the delegation of ICRC expressed satisfaction and assured them maximum co-operation of the Nigeria Police Force.

In his remarks, the Head of Delegation Mr Eloi Fillion assured the IGP of their Commitment to partner with Nigeria Police Force, in training and access to health care. The delegation presented posters to IGP for onward distribution to police formations.

The IGP, while receiving the President Dr. Ahmed T. Mora mni and his exco, expressed his gratitude to the President and his executives for honoring him as a member ABU Alumni and assured them his maximum co-operation and necessary support and thanked them for the visit.

In his remarks, the President of ABU Alumni Dr. Ahmed T. Mora mni, congratulated the IGP for his well deserved appointment as the 19th indigenous Inspector-General of Police.

The president further highlighted some of the programs to be executed by the association and seek for the cooperation and assistance of the IGP in the execution of some of these projects, assured him of their supports, he appreciated the warm reception accorded him and his executives.