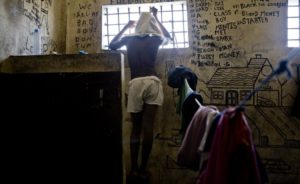 The atmosphere was calm, as inmates with   ironic smiles, laced with remorseful faces heralded  the sunshine at the Kirikiri medium security prison and female prison at Apapa Lagos on March 1, 2017. It was a facility tour by the pressmen as part of the event marking the media round table for journalists on issues pertaining to prison reforms.

The workshop which was held from 1st to 3rd of March, 2017 in collaboration with Prisoners Rehabilitation and Welfare (PRAWA), a Non-Governmental Organisation and supported by Foreign and commonwealth office was a deliberate effort by PRAWA and Nigerian Prison service to ensure proper reforms in the Nigerian Prisons. This, according to the Public Relations Officer, Deputy Controller of Prisons, Francis Enobore includes but not limited to, appreciating  the situation in the prisons and bridging  the communication gap among various publics, notably, the media.
The members of the media who were received amidst rousing applause and ovation by the Controllers of Prisons (CP) to both the Kirikiri and Apapa Prisons added colour to the occasion. The relationship between the inmates and prison staff may not be the way a famous soul musician, Asa described it in her song titled ‘jailer’ where she  claimed that the inmates are being treated as modern slaves. The true picture was captured by the way the inmates chant whimsically at their bosses calling them endearing names like mummy and daddies while Controller O.T Tinuoye said he choose to describe them as residents of Kirikiri rather than prisoners or inmates.
CP Oluwaniyi who led the tour to the Nigerian Prison Service vocational centres expressed optimism regarding skill acquisition in areas like tailoring, barbing, laundering, hair dressing, tie and dye, catering and bead making stating that the development will make the inmates useful when they are reintegrated into to the society. He further revealed that majority of the prison staff patronize the products and services rendered by inmates, just as some part of the money made are usually meant for the Prison service while the remaining are kept  for the inmates.
Speaking on how inmates are selected for a particular skill acquisition program, Oluwaniyi said inmates are subjected to various levels of tests to know their capability to determine which skill will suit them. He also revealed that about eight of the inmates are preparing for the upcoming General Certificate Exams while six inmates are currently students of the National Open University of Nigeria studying various courses. The female prisons similarly have 14 students currently on the verge of acquiring Bachelor of Science degrees at the NOUN while two of them are doing Postgraduate Diplomas (PGD). It was also discovered that the female prison currently has about 11 babies and 6 pregnant women, according to the supervisor of the female prison Mrs Ariyo AO.
She said new born babies in the prison are usually handed over to the relatives’ nursing mother after 18months or taken to the prison crèche for proper welfare. She also revealed that pregnant women are given adequate care while in severe cases, the Prison service contacts government hospitals which the service is already in partnership with.
While the NPS continue to lament the challenge of space for proper prison activities, the problem of prison congestion and awaiting trial persons have continued to be the bane of the service. For example, the Kirikiri medium prison has over 3,051 inmates in a facility meant for 1700 while 2627 are waiting trial and only 424 are convicted. The female prison similarly has 208 persons awaiting trial out of the total of 273 inmates in the facility.
Reacting to the situation during an interactive session with the media, retired CP Dr Ifedioha Orakwe said that, prison is for convicted people alone and not for awaiting trial persons because awaiting trial prisons in recent times have become a fertile ground for recruiting terrorists and extremists. This, according to him, is because their long detention has terribly affected their psyche, which has in turn,  removed humanity out of them.  He further lamented the increase in number of awaiting trial inmates over the years while urging that trials should be done within the shortest possible time rather than releasing inmates after long detention without trial which he described as ‘amorphous poison’.
In his presentation, the executive director of PRAWA, Mr Yinka Lawal explained the purpose of the Security and Justice Reform Program (SJRP)  and  how it intends to get improved knowledge of demographic statistics of awaiting trial persons and providing legal support service for them in order to give them access to Justice, which he believes, will checkmate the problem of prison congestion. Mr Lawal also revealed that his organisation intends to partner with Nigerian bar association and other paralegals while ensuring better publicity for the plight of inmates in Nigerian prisons.
The NPS spokesperson, Mr Enobore in his own presentation explained that the service faces so many challenges managing the media regarding information from the prison as media practitioners prefer to give advantage to  negative stories rather than the positive activities like skill acquisition within the prison facility. This according to Enobore,  has fuelled the mutual distrust between the NPS and the media and also creating a disturbing mindset about the prison by Nigerians.