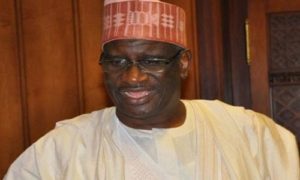 Mustapha Mohammed, a witness in the trial of a former National Chairman of the Peoples Democratic Party, PDP, Haliru Bello and his son, Mustapha Mohammed on Wednesday, March 8, 2017 told Justice A. R Mohammed of the Federal High Court, Abuja how over N160million was paid to Umar Tafida Kebbi, a former governorship aspirant in Kebbi State by former National Security Adviser, Col. Sambo Dasuki (retd).

Bello and his son are on trial alongside their Company, Bam Project and Properties Limited on a 4-count charge of money laundering preferred against them by the Economic and Financial Crimes Commission, EFCC.

They were alleged to have collected N300million from the Office of the National Security Adviser, ONSA, being part of the funds meant to fight insurgency in the North-East of the country.

Mohammed, a banker with United Bank for Africa, UBA, who was led in evidence by Adebisi Adeniyi, counsel to EFCC, said that, “on March 23, 2015 an inflow of N163,800,000 was made from BAM Projects and Properties Limited to Hijrah Textile Nigeria Limited whose sole signatory was Umar Tafida Kebbi, a former gubernatorial aspirant and a traditional title holder”.

According to him, the balance on the account before the inflow was N25million. He went on to tell the court how N10million was withdrawn in 16 tranches on March 25, 2015 and another N2.8million, all on same day.

Mohammed, who testified as PW4 stated that sometime in November 2015, a letter was sent to the Compliance Unit of UBA from EFCC requesting it to come with some documents regarding Hijrah Textile Nigeria Limited which included account opening package, mandate card, statement of account from January 2011 to December 2015, as well as the instrument used in crediting and debiting the account.

Thereafter, Justice Mohammed adjourned to May 10, 2017 for further hearing.