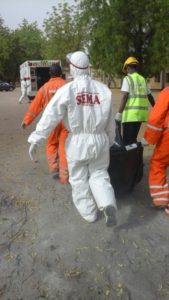 An attempt by another set of female suicide bombers to attack a community around university of Maiduguri was foiled by security personnel about 4am Monday morning  (10/ 04/2017).

There was a similar explosion last Saturday at a mosque close to Federal high court jiddari polo, where the emergency response teams evacuated the bodies of  two female suicide bombers believed to have died in the incident.

The Saturday’s explosion which occurred at about 5.25 am, affected four victims who were transported to hospital.