Home Features Rule of Law: Why ECOWAS Must Apply The Gambia Experience on Nigeria 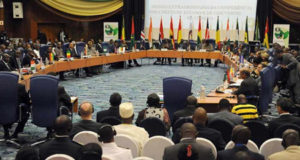 There is no doubt that the fundamental rights of all Nigerian citizens are guaranteed by the 1999 constitution of the country, which provisions the President of the Federal Republic, Muhammadu Buhari swore to uphold.

Described and seen as a disciplinarian; one who was believed to have impressive qualities of leadership paraphernalia, President Buhari has rather failed to portray that particular quality of leading Nigerians in accordance with the rule of law. This is especially as it relates to contravention of court orders in issues of fundamental human rights of Nigerian citizens.

In these matters, especially that affects former National Security Adviser (NSA), Sambo Dasuki, Buhari has subsumed himself to be, not only the President that he was elected to be, but also the head of the judiciary that he is not. This is so much that most judges’ rulings, especially those in which cases he has vested interest, are subject to Buhari’s assent – like laws passed by the National Assembly.

Mr. President’s fight against corruption is regarded by both national and international communities as ‘incomplete’ without committed respect for the rule of law. The rule of law is a veritable ingredient of democratic rule without which it is not coherent. The theory of coherentism in democracy is such that the practical leadership qualities should be seen to cohere with the principles of democracy, the leading pilar of which is the rule of law.

Shouldn’t Buhari’s failure to be bound by the orders of four courts, including that of the ECOWAS confirm Nigerians apprehensions that he is out to take a revenge against the former NSA who was alleged to have held him captive during the Abacha coup? Does Mr. President believe in our judiciary, which swore him to office? Why did Buhari take Dasuki to court in which he did not believe? Should we amend Nigeria’s constitution so that the President could, as well, be the judge in our courts? What has the President against Dasuki that the courts would grant him bail but he would overrule the courts, including the ECOWAS court? These are fundamental questions that should address issues of fundamental rights that are being abused by the President.

If the gravity of alleged offenses upon which one is standing trial in court is what should determine whether he be granted bail or not, Nnamdi Kanu is a good basis for Dasuki to be released on bail. One of the five sustained charges against Kanu, the court having struck out six, is treasonable felony – a declaration of war against the state. Nigerian constitution describes treason as a gross offense punishable by death.

If Kanu could be granted bail and be released by Buhari, why should Dasuki whose alleged offense is less in gravity be denied to enjoy bail granted to him by four courts of competent jurisdiction? Is it because no one is making noise in favour of Dasuki as many did in favour of Kanu?

The Economic Countries of West African States (ECOWAS) of which Nigeria is a member, recently made giant moves in the African sub-region to ensure the providence of the rule of law in the Gambia. The body’s assertiveness made defeated former Gambian dictator flee the country to allow the will of the people prevail. That was a first good step taken to check the excesses of African leaders, especially those of the sub-region, who feel they could, at will, hold on to power even where they lost in free and fair elections.

Aside from ensuring that winners in elections take over power from those who lost out, ECOWAS has a duty to ensure that rule of law, which is the backbone of any sustainable democracy, takes precedence no matter who is involved.

It is no longer news that former National Security Adviser (NSA) to former president Jonathan, Col. Sambo Dasuki has remained incarcerated on the allegedly misappropriating funds given to his office by the Central Bank of Nigeria, among others, since after Jonathan lost the 2015 presidential election to Muhammadu Buhari. It is not also news that the Federal government of Nigeria and Dasuki have been in courts over the allegations.

In September, 2015 a Federal High Court in Abuja presided by Justice Adeniyi Ademola, granted bail to Dasuki on self-recognition after he pleaded not guilty to a one count charge of illegal possession of firearms. It was argued that the offense was bailable based on section 158 (1) (2) (3) of the new Administration of Justice Act and Sections 35 and 36 of the 1999 Constitution. He was to deposit his international passport with the Court, as a measure to ensure he does not jump bail.

It is to be believed that no matter the enormity of any offence committed by any individual, once the Courts pronounce him fit to enjoy bail, so shall it be. Bail is a fundamental right of all Nigerians as guaranteed by section 35 of the Constitution. Though charged with illegal possession of firearms at the Federal High Court and money laundering offences at the High Court of the Federal Capital Territory, notwithstanding the gravity of the charges, Col. Dasuki was admitted to bail by three trial courts. And, having fulfilled the bail conditions on December 29 and the Kuje prison authorities, having released Dasuki, the Department of State Security immediately rearrested him.

In December, 2015 a High Court in Federal Capital Territory, FCT, Abuja presided by Justice Husseini Baba Yusuf also granted bail to Dasuki and four others standing trial for money laundering. The third bail was granted by Justice Peter Affem of FCT High Court. Conditions of all bails were met by Dasuki.

Compelled by the circumstances of his denial to bail, Dasuki approach ECOWAS Court to secure the enforcement of his human rights to personal liberty guaranteed by article 6 of the African Charter on Human and Peoples Rights. Although the federal government challenged the competence of the ECOWAS Court to hear and determine the suit, the preliminary objection was dismissed. It held that the detention of Dasuki without a court order was not justifiable under the Nigerian Constitution and the African Charter on Human and Peoples Rights. As a consequence, the court ordered Dasuki’s release and damages to him to the tune of N15 million as reparation for infringing his human rights.

The ECOWAS Court through Justice Friday Chijioike Nwoke ordered immediate release of Dasuki from detention, holding that the Federal government had violated both national and international laws on the right of persons and citizens to freedom of liberty. It imposed a fine of N15,000,000 against Nigeria as compensatory damages to Dasuki for the deprivation of his freedom to liberty and the deprivation of his properties. Justice Nwoke held that even if the applicant had committed a crime the law still had it that due process of the law must be observed in his trial.

“Having perused the case before us, we have come to the conclusion that the re-arrest and detention of the applicant after he had been granted bail by three courts since last year make mockery of the rule of law. Executive arm should not interfere with the judiciary. “Even if the applicant has committed crimes of whatever nature, the principle of innocence must be respected and the fact that he has been charged to court does not disentitled him to freedom of liberty… Court must rise to their responsibilities and prevent executive lawlessness. It is the applicant today; it could be anybody tomorrow. There is no legal basis for the re-arrest of the applicant other than to circumvent the bails granted by courts. We have no difficulty in coming to the conclusion that the purported search warrant claimed to have been obtained by the Nigerian government was an afterthought aimed at perverting the cost of justice because the so-called search warrant was not certified and to worsen the case the defendant claimed that it could not serve the same search warrant on the applicant. For the avoidance of doubt, anybody who commits crimes must be put on trial before an appropriate court but in doing so, the state must respect local and international laws in the prosecution of such persons.”

It should be recalled that Buhari it was that spearheaded the operations of ECOWAS in the Gambia. Nigeria also intervened for the release of Niger Republic’s ex-President Tanja Mammadou in line with the order of the ECOWAS Court. Why then should Buhari not direct the DSS to comply with the Court order to release Dasuki on bail?

Yet, at a resumed sitting on fire-arms charges, Justice Ahmed Rahmat Mohammed of the Federal High Court, Abuja in an amended charges, affirmed the bail granted to Dasuki in 2015.

That Dasuki could not be allowed to enjoy bails admitted by Justices Adeniyi Ademola, Peter Affen, Husseini Baba-Yusuf of the FCT High Court and the ECOWAS Court, is an outright display of non-respect for the rule of law by the Federal government.

Through a Presidential Media Chat in December 2015, it was to be known that President Muhammadu Buhari was behind Dasuki’s continued detention in spite of courts orders for his release on bail.

This development therefore calls for ECOWAS’ intervention to enforce compliance by the Federal government to obey the rule of law. Like it started by ensuring the enthronement of democracy in The Gambia, ECOWAS should continue in the same light because rule of law, as it is, MUST be seen as the backbone of all democracies. Otherwise, we would be operating a ‘Militro-Democratic’ government.

el-Kurebe, who coordinates the Media Forum for Development, writes in from Sokoto.