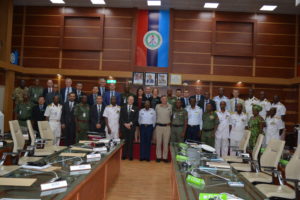 The Staff and members of the United Kingdom Royal College of Defence Studies (RCDS) led by Major General Lawrence Craig have paid a visit to the Chief of Defence Staff (CDS) General Abayomi Gabriel Olonisakin at the Defence Headquarters Abuja.The visit was part of the Royal Defence College Geo-Strategic Study Tour to understudy the Nigerian military winning strategy in combating Boko Haram Terrorism in the North East and militancy in the Niger Delta region.The CDS noted that Terrorism and insurgency are global security challenges and the Defence Headquarters has recorded significant victory over the Boko Haram Terrorists who hitherto halted socio economic activities in the North East.  He expressed optimism that with the reinvigorated Armed Forces of Nigeria and the collaboration of the Multinational Joint Task Force, the BHT menace would soon be over.The CDS who was represented by the Chief of Defence Policy and Plans, Air Vice Marshal Bashir Saidu expressed appreciation to the UK for extending their training programme to some of Nigerian officers in their prestigious Royal Defence Academy.In his response, the Team Leader, General Lawrence stated that the visit was part of the Royal Defence College geo-strategic tour to acquaint the members with the emerging global phenomenon in African perspective.  He applauded the CDS and the Nigerian Armed Forces for their tremendous contributions to Nation building and observed that in spite of the myriad of security challenges, the Nigerian military has been able to give a good account of itself as a leading military force in Africa and the sub-region.

How we discovered Headless Body of the Abducted Hon Okoye- Police