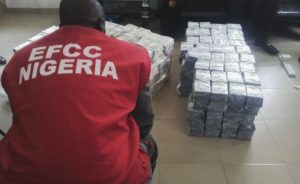 Justice Muslim Hassan of the Federal High Court sitting in Ikoyi,  Lagos has ordered the final forfeiture of the sums  of  $43,449,947, £27,800 and N23,218,000 recovered in an apartment at Osborne Road, Ikoyi, Lagos to the federal government.
Operatives of the Commission  had, on Wednesday, April 12, 2017, stormed a four-bedroom apartment on the seventh floor of Osborne  Towers located on 16,Osborne Road,  Ikoyi,  Lagos,  where the large sums of money was uncovered
The operation followed a whistle-blower confidential alert received by the Commission’s office in Lagos in the early hours of  April 12, 2017.
Consequently,  the Commission on April 13, 2017, obtained an interim court order forfeiting the funds to the Federal Government.
In his ruling, Justice Muslim had given 14 days for anyone interested in the funds to appear before him to show cause why the money should not be permanently forfeited to the Federal Government.
At the next adjourned date on May 5, 2017, counsel to the EFCC,  Rotimi Oyedepo,  had revealed that the wife of the embattled Director- General of the National Intelligence Agency, Ayo Oke, paid a princely $1.658m to acquire the Osborne flat.
Oke was said to have made a cash payment of $1.658m for the purchase of the flat between August 25 and September 3, 2015 in the name of a company, Chobe Ventures Limited.
She and  and her son, Ayodele Oke Junior, were said to be  directors in the company.
Oke was also said to have made the cash payment in tranches of $700,000, $650,000 and $353,700 to a Bureau de Change , Sulah Petroleum and Gas Limited, which later converted the money  to N360,000,000 and subsequently paid it to Fine and Country Limited for the purchase of the property.
Oyedepo argued that “The circumstances leading to the discovery of the huge  cash stockpiled in Flat 7B, Osborne Towers, leaves no one in doubt that the act was pursuant to an unlawful activity.
“The very act of making cash payment of $1.6m without going through any financial institution by Mrs. Folashade Oke for the acquisition of Flat 7B, Osborne Towers, is a criminal act punishable by the Money Laundering (Prohibition) Amendment Act. I refer My Lord to sections 1(a), 16(d) and 16(2)(b) of the Money Laundering (Prohibition) Amendment Act. “
While urging the court to order the permanent forfeiture of the funds to the Federal Government, Oyedepo  had also  argued that the property,  which was purchased in a criminal manner, made the money  recovered therein to be proceeds of unlawful acts.
Oyedepo further said that that despite the newspaper advertisement of the initial order of April 13, 2017 temporarily forfeiting the money to the Federal Government, no one showed up in court  to show cause why the money should not be permanently forfeited to the Federal Government.
Oyedepo had also drawn the attention  of the court to the fact that Chobe Ventures Limited, in whose apartment the huge sums were recovered, did not come to court to challenge the forfeiture order, despite being served with the motion on notice at its registered address of No. 18 Ogunmodede street, off Allen Avenue, Ikeja, Lagos.
He added: “The failure of Chobe Ventures Limited, in whose custody these properties we are seeking to forfeit were found, to show cause before My Lord why the property (money) should not be forfeited to the Federal Government of Nigeria, Your Lordship should hold that Chobe Ventures Limited has admitted all the facts deposed to in our affidavit and order the final forfeiture of the property to the Federal Government. “
During the proceedings,  a private legal practitioner, Olukoya Ogungbeje,  had filed an application urging the court to suspend further action in the forfeiture proceedings pending the outcome of the Vice-President Yemi Osinbajo three-man panel constituted by President Muhammadu Buhari to investigate the claim by the NIA boss, Oke, that the money belongs to the agency.
However,  Oyedepo opposed Ogungbeje’s application and urged the court to proceed with the final forfeiture proceedings.
In his ruling today,  Justice Hassan upheld  Oyedepo ‘s submission and  dismissed Ogungbeje’s application for lacking in merit.
The judge described the application as totally strange, adding that Ogungbeje had no right to seek a stay of proceedings in the case,  since he did not appeal against the interim forfeiture order.
The judge, who noted that Ogungbeje was not a party in the suit filed by the EFCC, described the lawyer as a “meddlesome interloper and a busybody,” adding that his application was strange to law.
Thereafter,  Justice Hassan gave an order permanently forfeiting the funds to the Federal Government.
Justice Hassan held that  “I am in complete agreement with the submission of the learned counsel for the applicant (EFCC) that the property sought to be attached are reasonably suspected to be proceeds of unlawful activities and that by every standard this huge sum of money is not expected to be kept without going through a designated financial institution; more so, nobody has shown cause why the said sum should not be forfeited to the Federal Government of Nigeria. Having regard to the foregoing, I have no other option but to grant this application as prayed.
“For the avoidance of any doubt, I hereby make the following orders: 1. A final order is made forfeiting the sums of   $43,449,947 found by the Economic and Financial Crimes Commission at Flat 7B of No. 16 Osborne Road, Osborne Towers, Ikoyi, Lagos, which sum is reasonably suspected to be proceeds of unlawful activities to the Federal Government of Nigeria.”
The judge made the same order in respect of the £27,800 and N23,218,000.
Following the judgment, Idris Mohammed,  counsel to the EFCC, urged the court  to award a cost of N5m against Ogungbeje for wasting the time of the court with his application.
However, the judge declined the application.
Wilson Uwujaren
Head, Media & Publicity