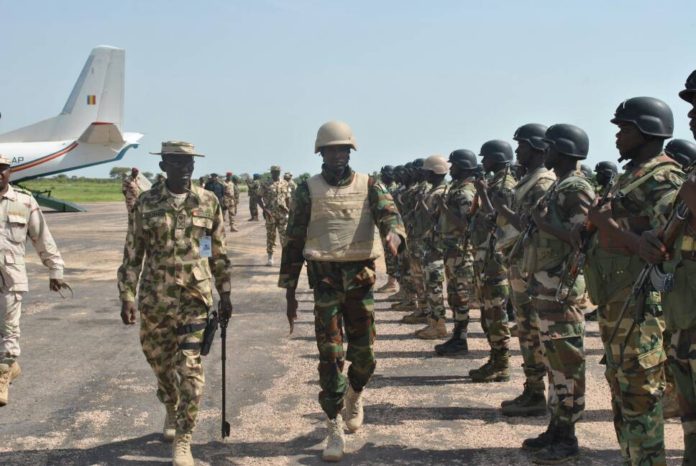 The Force Commander (FC) Multinational Joint Task Force (MNJTF), Major General Lucky Irabor today, Thursday 10 August 2017 paid a maiden visit to Sector 4, Diffa of the MNJTF.
On arrival at Diffa Airport, the FC inspected a Guard hosted by troops of Sector 4, Diffa – Republic of Niger. In his welcome remarks, the Sector Commander Colonel Major Noma Dari welcomed the FC and his entourage to the Sector Headquarters and introduced the members of his Staff. A detailed brief on the current situation and activities of Sector 4 Area of Operation (AoO) was presented.
In his remarks, General Irabor thanked the Sector Commander and his staff for the warm welcome accorded to him and his entourage. He commended the Sector Commander, staff officers and troops for their gallantry towards the fight against insurgency. The FC also used the forum to congratulate the entire command for their achievement and successes recorded so far. He commensurate with the Command for the lost of some soldiers and prayed for quick recovery of the wounded in action during Operation RAWAN KADA.
Major General Irabor commended the efforts of the Sector in the provision of medical outreach to the local population within and around Diffa. He specially thanked the political leadership of the Troops Contributing Countries for their cooperation, continuous support and leadership towards ensuring that Boko Haram Terrorism is brought to its knees. He equally thanked the Executive Governor of Diffa, His Excellency Mahaman Lawali Dan-dano for his invaluable support to the formation.
In his efforts to boost the troops’ morale, the FC presented cash incentives to the families of those that paid the supreme price and the wounded in action during Operation RAWAN KADA.
During the visit, the FC was accompanied by his Chief of Staff Colonel Major Seydou Badje, the Chief J3 Colonel Ndongo, Colonel Mustapha Anka the Military Public Information Officer and other staff officers of the MNJTF.
In view of the importance of the visit, you are please requested to disseminate this piece of information to the public.
We count on your usual cooperation.
MUSTAPHA ANKA
Colonel
Military Public
Information Officer
PRNigeria encourages institutions to be transparent in their information management as it provides news items from authoritative sources for free use by the media