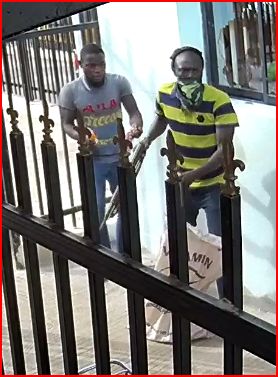 Police Provide Photos of Leaders of Offa Armed Robbery Gang
The Nigeria Police Force is making significant progress in the investigation into the Offa Banks robbery in Kwara state that occurred on 5th April, 2018. So far, more than Twenty (20) principal suspects have been arrested and their details were released to the public including the following exhibits that were recovered from them;
i. Two (2) Beretta Pistols
ii. Twenty (20) Rounds of Live Ammunition
iii. Four (4) Phones and SIM cards belonging to victims, some of whom were killed during the attack
All the suspects are cooperating with the Police in the investigation into the incident. Currently, some of the other gang leaders and principal suspects at large are being identified and their pictures obtained for further investigation.
To this end, the photographs of these wanted suspects are now being released to the public for assistance from public-spirited individuals and the general public for information to arrest them. They are also being placed on INTERPOL Watchlist and Red Alert. Other sister security and safety agencies are equally implored to arrest them and hand over to the nearest Police Station or Formation across the country or avail the Police with any information they may have or come across about these suspects.
Members of the general public who has any information about these wanted suspects should feel free to contact the Police through the following Phone numbers 08062080913, 08126285268,08032365122,07056792065,08088450152. Protection of the informant will be guaranteed by the Police and handsome rewards in addition to the pledge of Five Million (N5,000,000) by Kwara State Government await anyone whose information leads to the arrest of these wanted suspects.
5.    While the Nigeria Police Force, once again commiserate with the Government and people of Kwara State, most particularly the people of Offa, the Force will leave no stone unturned in ensuring that all the perpetrators of the Offa Banks Robbery are arrested and prosecuted.
ACP JIMOH MOSHOOD
FORCE PUBLIC RELATIONS OFFICER
FORCE HEADQUARTERS
ABUJA