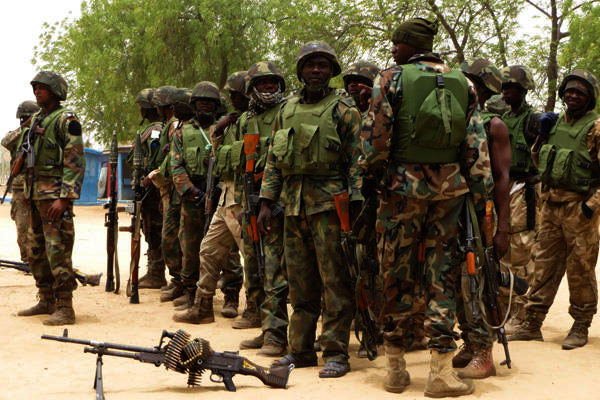 Troops Conduct Show of Force in Enugu, Owerri
Troops of the 82 Division Nigerian Army in conjunction with other security agencies conducted a massive flamboyant Show of Force in Enugu and Owerri Cities and environs.
The exercise started in the early hours of today,(at about 6:30 am to about 2:45pm) on Monday the 21th of May 2018 in Enugu and Owerri respectively.
The show of force was conducted round the major flash points and strategic areas of Enugu city and environs such as Coal Camp, Emene,IKe,New market, independence layout,New Haven, Trans Ekulu, Aukunanaw,Enugu – Abakaliki road, Enugu -portharcourt express way among others.
While in Imo State, troops of 34 Brigade and other agencies moved round the general areas of Heroes Square, 2nd Ward Avenue,New Owerri, Amakoya, Egbu and Orlu  roads. Others include Owerri -Onitsha, Owerri-Okigwe and Owerri -Ohaji Egbema roads.
The 82 Division Garrison and 103 Battalion troops, some elements of the 553 Base Services Group Nigerian Airforce, Nigerian police, Department of State Security Services and Security and Civil Defence Corps actively participated in the exercise in Enugu and Imo States.
Others are the Nigerian Immigration personnel,Nigerian Drug Law Enforcement Agency and the Federal Road Safety Commission also took part in the show of Force.
The exercise is purely a show of force, aimed to send a clear message to individuals or groups who intend to cause breakdown of law and order.
Law abiding members of the public are enjoined not to worry on seeing long convoy of military and para military vehicles and equipment on selected locations across the south east zone.
SAGIR MUSA
Colonel
Deputy Director Public Relations 82 Division