This followed the release of N20m by Governor AbdulRahman AbdulRazaq for immediate rehabilitation of roads that are in bad state and needed urgent fixing in the capital city.

He said the agency has the mandate to quickly fix the roads to end the nightmares of the people. 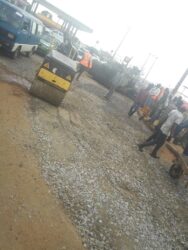 “We have started work immediately based on the fund the Governor has just released to KWARMA and Kwara State Asphalt Plant,” Jibril said.

Jibril said they have a mandate to complete the rehabilitation within the next seven days, with the phase two of the works likely to begin very soon.

He lamented the poor state of the roads across the state, adding that the government would collaborae with the Federal Government and private sectors on some of the roads, especially federal roads.