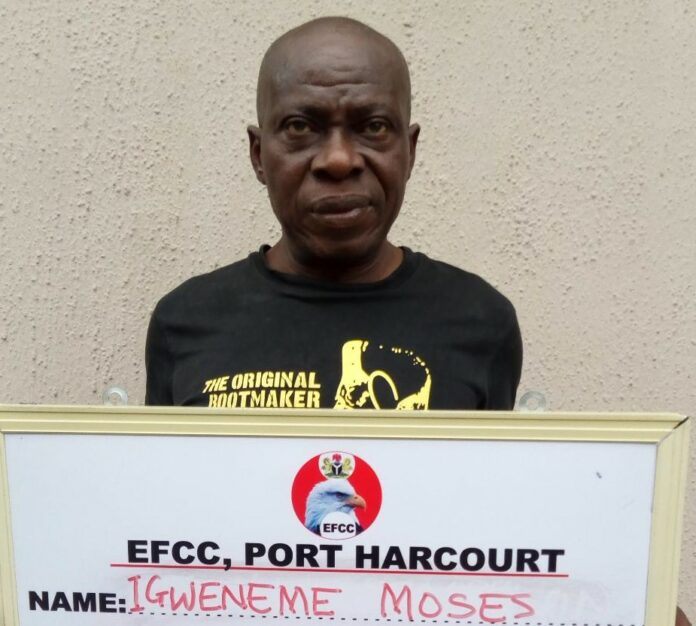 Specifically, Moses was docked for defrauding a Swiss, the sum of $240,700 (Two Hundred and Forty Thousand Seven Hundred American Dollars) though several criminal disguises of love and promise of marriage.

One of the count charges read: “That you, Igweneme Moses and Igweneme Nkiruka Blessing (now at large) between the 18th and 24th May, 2018 directly took possession of the sum of $38,000 (Thirty Eight Thousand US Dollars) which you knew or reasonably ought to have known is the proceeds of an unlawful act, to wit: obtaining money under false pretences from one Chantal Helene Meadery and thereby committed an offence contrary and punishable under Section 15(2) of the Money Laundering( Prohibition) Act, 2011( as amended)”.

He pleaded not guilty when the charges were read to him.

In view of his plea, Prosecuting Counsel, A. Osu, prayed the court to fix a date for commencement of trial. However, Counsel to the defendant, C.V Oforleta made an oral application for bail of his client to enable him prepare for his defence. The application was, however, turned down by the judge who ordered him to place a formal application for bail before the court.

Justice Mohammed ordered that the defendant’s case file be transferred to a vacation judge pending his formal bail application. He also ordered that he should be remanded in prison custody.

Troubles started for Moses when the EFCC was petitioned by the Attorney General of the Federation and Minister of Justice on behalf of Switzerland Government, concerning Chantai Helene Maedery, a Swiss that was defrauded by a two- man syndicate comprising Moses and his daughter, Igweneme Nkiruka Blessing (now at large) through fraudulent online dating schemes.

The petitioner alleged that the defendant “was involved in the act of fraud for commercial gain (Romance Scam) while pretending to be someone else through a dating app “Bumble.com” as of 19th February, 2018 and promised to marry Chantai Maedery with the hope of building a future together in Switzerland”.

Investigations showed that the syndicate had also defrauded other foreigners through their fraudulent dating schemes.

Ogbe, Ejivwo and Saidu were prosecuted on a one-count charge, bordering on fraudulent inducement, contrary to Section 320(b) and punishable under Section 322 of the Penal Code Law of the Federation, 1990.

They all pleaded guilty to their separate one charge. Following their plea, the prosecution team led by H.M Muhammad informed the court that both the prosecution and the two defence counsels that consist Adaje Abel and David Agbane have entered into a plea bargain agreement and urged the court to convict and sentence the defendants base on the terms of the agreement.

The two defence counsels, however, pleaded with the court to temper justice with mercy.

They separately told the court that the three defendants were remorseful and have regretted their actions, adding that they were first time offenders who should be given a second chance to turn a new leaf.

Justice Idris convicted the defendants, pursuant to the plea bargain agreement and ordered that they be remanded in prison custody pending sentencing on July 30 adjourned date.

Ijire was, however, convicted on a different matter. He faced a three-count charge, bordering on fraudulent inducement, cheating and impersonation, which are contrary to Section 320 of the Penal Code Law, Cap 532, Laws of the Federation of Nigeria and punishable under Section 322 of the same Law.

One of the charges reads, “That you Karo Ijire sometime in 2019 in Abuja within the jurisdiction of this honourable court, fraudulently induced one Clarisa Hosino, a citizen of the United States of America to deliver the sum of $1000 (One thousand United States Dollars) via Western Union to you and you thereby committed an offence contrary to Section 320 of the Penal Code Law, Cap 532, Laws of the Federation of Nigeria, 2004 and punishable under Section 322 of the same law.”

He pleaded guilty to all the charges.

Following his plea, the prosecution led by J. Saidu and Maryam Ahmed Aminu informed the court of a plea bargain agreement between it and the defence team, and urged the court to convict the defendant in accordance with the agreement.

“We have filed a plea bargain agreement before the court on 23rd July, 2019, signed by both parties. May I humbly adopt this agreement and urge this honourable court to convict and sentence the defendant based on the terms agreed on the plea bargain,” Aminu told the court.

The defence counsel, Lady Rose Nmbata, however, prayed the court to temper justice with mercy, noting that the defendant has regretted his action and has promised to be a good citizen, adding that he was a first time offender and have never been convicted of any crime.

Justice Idris convicted Ijire as charged and ordered that he be remanded in prison custody, pending his sentencing on the July 29, 2019 being the next adjourned date.