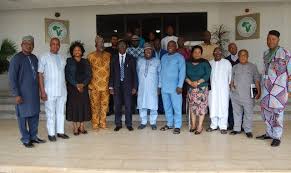 The Director General, Institute for Peace and Conflict Resolution (IPCR), Bakut Tswat Bakut (Phd) has said that the Institute would partner with key stakeholders such as National Boundary Commission (NBC), Office of the Surveyor General of the Federation (OSGF), Department of Petroleum Resources, (DPR), National Emergency Management Agency (NEMA) and the Governments of Ondo and Delta States to find lasting solution the conflict bedeviling Tsekelewu and Ojumole Communities in Ondo State.

The Director General made this known on Tuesday, August 6, 2019 in Abuja while receiving a delegation from Ondo State Government led by the Hon. Commissioner of Environment, Mr. Funso Esan.

Dr. Bakut said that IPCR has the mandate and capacity to investigate immediate and remote causes of the crisis and to suggest solutions or intervene. He says, “Your present here is recognition of what the Institute is doing in terms of settling crisis, and I am assuring you that all the stakeholders involved would meet with a view to offering multiple solutions to the problem.” He added that the Institute would dispatch research officers to conduct critical research into the conflict.

In his contribution, the Director Internal Conflict Prevention and Resolution Mr. Peter Opara, called on the affected communities to learn how to live in peace with one another.

He said in spite the fact that the Federal Government would intervene and take appropriate action, however, restoration of peace cannot only be done from Abuja, but that there must be full cooperation from the affected communities.

Earlier, in his remarks, the leader of the delegation, who is also the Hon. Commissioner of Environment of Ondo State, Mr. Esan, said that the rationale behind their visit was to sought for professional intervention from IPCR in an effort to solve the lingering crisis between Tsekelewu and Ojumole Communities in Ondo State.

According to him, Tsekelewu and Ojumole are oil well communities in Ondo state very close to Delta State.

Institute For Peace and Conflict Resolution.