Has Nigeria fully tapped the immeasurable potential of science to fast-track socio-economic growth for its citizenry? Eminent research-academics at the launching of the ‘African Science Literacy Network’ (ASLN) in Abuja recently, have unanimously said capital ‘NO’.

They submitted that the impact of science in the life of any nation is not only immeasurable, but cannot be over-emphasized.

They argued that lack of enabling environment to carry out groundbreaking research, poor funding, low media coverage, lack of science-exposure by journalists, absence of offices or units of science communication in Nigerian universities, poor research infrastructure, obsolete laboratory equipment, lack of effective curriculum on science communication, poor motivation, and lack of interest for science by policy makers, among other mitigating factors, have remained the major challenges hindering science education and serving as drawbacks for scientific development in the country.

They however, advocated for a change in the narrative of science communication especially in the media, while pointing out that Nigeria can speedily attain accelerated socio-cultural growth if science is accorded a deserving priority attention by both the Federal and States’ Government.

This was at a three-day ‘Science Communication and Journalism Workshop’ organized by the Teaching and Research in Natural Sciences for Development in Africa’ (TReND).

ASLN is an initiative of TReND in Africa, in collaboration with the University of Sussex, Francis Crick Institute (London), Yerwa Express News and Science Communication Hub Nigeria.

74 selected Nigerian journalists and scientists were trained on how to effectively engage the public, while also sharpening their science communication skills at the workshop held at Rockview Hotel, in Abuja.

The participants were thereafter inducted as Fellows of the Literacy Network, and presented certificates during the grand finale of the workshop.

According to Dr. Mahmoud Bukar Maina, TReND’s Director for Outreach, the event was aimed at equipping participants with the requisite knowledge of science reporting, research techniques and how to bridge the gap between science, media and society.

Mahmoud, who is also the Founder of Science Communication hub in Nigeria, in an address of welcome to herald the opening of the workshop, explained that since journalists have more access to the public, there must be a collaboration between them and scientists for effective communication of groundbreaking research findings by the later.

“To take the African continent to the next level demands that we first liberate science. Science is everything: from economics, wealth creation to just everything, you cannot do without science,” he asserted, adding that it is the reason why TReND in Africa is at the fore front of ‘advocating, campaigning for and promoting science.’

Dr. Mahmoud, a Research Fellow at the University of Sussex, said despite the frightening scale of cultural and religious misconceptions about science, forging a robust partnership between scientists and journalists, which the workshop seeks to achieve, will go a long way to help tackle the problem.

“I strongly belief that establishing a symbiotic partnership between scientists and journalists will help in addressing the pubic misconceptions about science, which is affecting livelihood and potential of Nigeria in science and technology,” he added.

In a paper titled: “Science as driver of development: The importance of communication,” Prof. Isa Husseini Marte, urged government and other relevant stakeholders to prioritize scientific research in order to fast-track national development, saying ‘science is what develops the world.’ 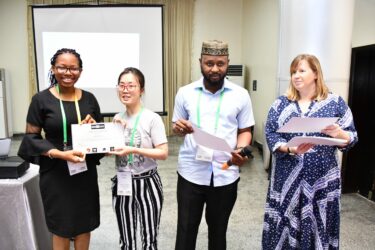 While decrying the abysmal level of funding for research in Nigeria, Marte, a Professor of Pharmacology at the University of Maiduguri (UNIMAID), disclosed that the United States (US) spends about three percent of its Gross Domestic Product (GDP), which is $529 billion, on research development.

“Our country, Nigeria, has a long way to go with only 0.3 percent from its GDP set aside for research, in which TETFUND spent just N3 billion naira in 3 to 5 years,” he said, before adding that: “It seems we do not know the value of Research and Development (R&D). Everyone in Nigeria is only interested in the finished product. No one is interested in research. Not the federal government, states’ government or even TETFUND.”

Prof. Marte, who is also the Commissioner of Higher Education in Borno State, explained that without research and development, Nigeria is doomed as a nation and society, saying countries that have advanced technologically talk, eat and breathe science.

He said: “We have to put our house in order if we want to talk about science and research. Money needs to be pumped into research. If we want to do research, someone must come out with the money. And the first place is government, then the private sector. Any country that does not prioritize research and development is doomed to fail.”

The Chairman of the ceremony and Governor of Yobe State, Hon. Mai Mala Buni, noted that there is no better time to establish a synergy between scientists and journalists considering the pace of development worldwide.

Gov. Buni, who disclosed that his administration has made Science, Technology, Engineering and Mathematics (STEM) a top priority, said he also declared a state of emergency on education in order to raise the standard of the education sector, and also encourage the studies of science in the state.

Represented by Dr. Rose Gidado, a Deputy Director at the Department of Agricultural Biotechnology (NABDA), Nabasu, said: “Scientists need to be encouraged to showcase their amazing research findings to the public. African scientists need to comprehend the central role of science and communication in societal development.”

The Editor-in-Chief of DailyTrust newspaper, Manir Dan Ali, urged scientists to cultivate the habit of reaching out to journalists so as to effectively communicate their works, and also explain vital scientific phenomena.

Dan Ali, said it is quite unfortunate that journalists write health reports with phrases such as a “mysterious illness” or “strange disease” because the scientists and medical experts are not readily available to explain the phenomenon to them.

In a chat with PRNigeria, Abdulhamid Al-Gazali of Yerwa Express News, underscored the need for the conversation on science communication to be sustained on various media platforms and campuses of the journalists and scientists who attended the workshop.

The duo of Ruth Larbey, a researcher at the University of West England, and Dr. Katy Petherick, a don at the University of Sussex, in the United Kingdom (UK), called for an attitudinal re-orientation on the part of journalists. This, according to them, will enable journalists report scientific breakthroughs and innovations clearly to the public.

They also called on scientists to develop and nurture a harmonious relationship with the media, while urging Nigerian universities, polytechnics and research institutes to frequently organize science expos, workshops and seminars for scientists and erudite academics to showcase their innovative research products.

Insurgency as Neocolonialism in Nigeria

Service Chiefs and Sallah Feast for Troops: A Post-Mortem

Of Oil Firms’ Disdain for N/Delta and Military Intervention

Security Forces and Fixing the Gordian Knot of Insecurity