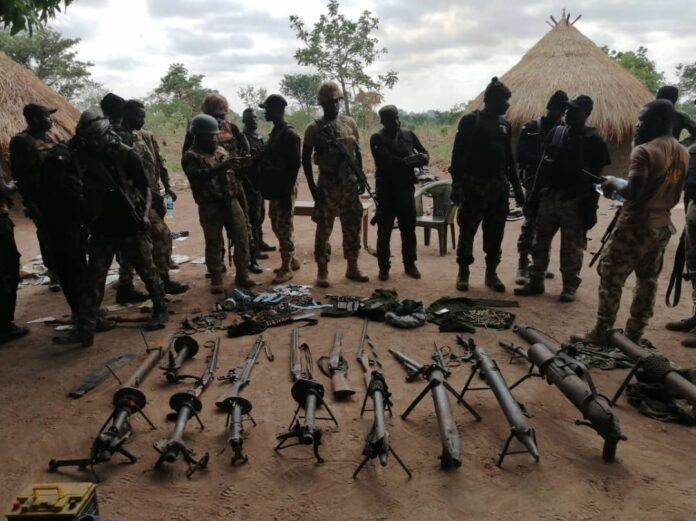 1. Troops of Operation WHIRL STROKE made up Sector 2 deployed at Katsina Ala, Ukum and Logo LGA’S of Benue state and those of Sector 4 drawn from parts of Taraba state at about 0430hrs on 22 April 2020 carrried out a special raid operation on a suspected militia camp located at Anku Mbagen in Atera-Jange Torov Council Ward of Ukum LGA of Benue state and recovered large cache cache of arms, ammunition and other items. This sequel to a timely and credible information received on the activities of Tiv armed militia operating around the border areas of Benue and Taraba states.

2. The armed militia on sighting the troops opened a barrage of fire on own troops. The Special Forces troops responded swiftly and neutralized Three gang members while others abandoned their position and weapons and fled into the bush with gunshot wounds. Items recovered include One 81mm Mortar gun, Five 60mm Commando Mortar gun, Seven locally fabricated Mortar tubes guns,Three SMG rifles, Three Double Barrel rifles,Two locally made rifles, One G3 rifle, One locally made pistol, Five AK 47 magazines, 166 rounds of 7.62mm NATO ammunition, One car battery, Fifteen rounds of locally made ammunition, Two bags of gun powder, Nine pairs of Camouflage uniforms, One generator, Three motorcycles, One cellular hand set, charms and assorted hard drugs. There was no casualty on own troops.

3. The Armed Forces of Nigeria wishes to restate its commitment to restoring peace in all parts of the country. It also continue to request the general public for credible information which will assist the military to rid the country of criminal elements.