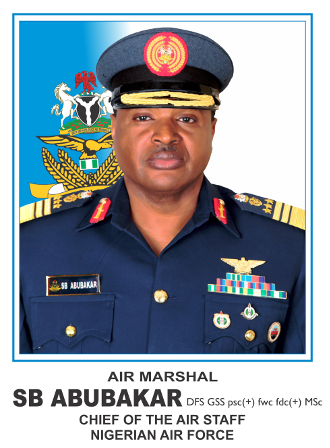 In furtherance of its aggressive capacity building efforts to tackle various internal security challenges in the Country, the Nigerian Air Force (NAF) has graduated another batch of Special Forces (SF) and Combat Search and Rescue (CSAR) personnel. The combined graduation ceremony, which took place on 15 May 2020, at the Regiment Training Centre (RTC) Annex in Bauchi comprised 94 trainees of the SF Course 6/2020 and 32 trainees of CSAR Course 2/2020. The graduating SF Course is the eighth set to be trained by the NAF as SF in the last 5 years, having conducted 5 SF Courses and 2 SF Instructors’ Courses while the graduating CSAR Course is the second batch, following the graduation of the first set in December 2018.

The day’s activities also featured the inspection of a 20-bed Isolation Ward at the 261 NAF Reference Hospital as well as the commissioning of an Olympic Size Swimming Pool for training of Regiment/SF personnel. The Isolation Ward would ensure that the Hospital is equipped to face the contemporary challenges of medical practice in today’s world, especially in response to emerging infectious disease threats like COVID-19, while the Pool was constructed to ensure that SF trainees receive robust, well-rounded training, including watermanship skills, to enable them operate effectively in marine and riverine terrains.

Speaking at the Graduation Ceremony, the Special Guest of Honour, the Chief of the Air Staff (CAS), Air Marshal Sadique Abubakar, noted that the SF and CSAR personnel were graduating at a time when the Nation was in dire need of their skills to add impetus to operations being conducted to restore normalcy in restive parts of the Country. He urged them to imbibe the attributes of honesty, courage, perseverance and adaptability as they would be required to operate in hostile environments to ensure that the NAF achieved its objectives. He also charged them to endeavour to justify the huge investment in their training by ensuring greater commitment to the security of Nigeria and Nigerians. Air Marshal Abubakar stated that the capability gap in SF and CSAR operations informed the decision to establish the Special Operations Command (SOC) in Bauchi along with its complement of Quick Response Groups and Wings in Gusau, Owerri, Ipetu-Ijesha, Katsina, Birnin-Gwari, Agatu, Nguoroje and Doma as well as the CSAR Group in Kerang, Plateau State. The NAF, he remarked, has subsequently trained over 1,060 personnel both overseas and locally in its bid to generate SF and CSAR teams to man the established units.

The consideration to train CSAR operatives locally, the CAS revealed, was as a result of insufficient training slots and high cost of overseas training. He further disclosed that the Directorate of Regiment was therefore tasked to develop a local training curriculum with the objective of ensuring that the NAF had personnel capable of rescuing downed aircrew in all terrains and weather conditions anywhere in Nigeria. “I am happy to note that our SF personnel have performed commendably well when deployed for operations in conjunction with other security agencies in various areas of operation, thus, returning sanctity to distressed areas in the North West, North East and North Central. This shows that enhancing the capacity and capability of our personnel is the best way of ensuring the attainment of our operational goals”, the CAS said

Speaking further, the CAS stated that the Nation and the entire world were currently embroiled in the COVID-19 pandemic, which, he noted, has affected all aspects of national lives with attendant high rate of morbidity. Accordingly, he said, the NAF, in living up to its constitutional role, had built adequate capacity for flight nurses to enable them serve as first responders in cases of medical emergencies. He equally highlighted that the NAF had hitherto embarked on mass production of face masks and Personal Protective Equipment (PPEs) as well as the provision of Liquid Oxygen to designated Hospitals and Isolation Centres across the country. He further disclosed that the NAF has also continued to provide airlift for personnel of the Nigeria Centre for Disease Control (NCDC) as well as medical equipment and supplies, whenever its services were required. He noted that the NAF had so far flown over 300 hours of airlift missions in support of the Presidential Task Force for COVID-19. All these efforts as well as several other initiatives, he said, were aimed at adequately providing Military Aid to Civil Authority as enshrined in the Constitution. According to him, appropriate protective measures had also been emplaced within NAF bases, while aggressive enlightenment campaigns to educate NAF personnel and their families on the dangers of the virus and how to prevent its spread had equally been undertaken. He therefore enjoined personnel to continue to stay safe and maintain physical distancing at all times.

Air Marshal Abubakar expressed his gratitude to the President, Commander-in-Chief of the Armed Forces, President Muhammadu Buhari, for the priority attention given to training and operational needs of the NAF. The support provided by the Federal Government, according to him, has positively impacted on the overall performance of the NAF, especially in the areas of training, which has substantially enhanced operational efficiency, as well as improved provision of welfare and other services. The CAS also commended the Air Officer Commanding (AOC) Ground Training Command (GTC), Air Vice Marshal (AVM) Idi-Amin, as well as the Commander Regiment Training Centre Annex and his team of instructors for working tirelessly to transform the personnel into SF and CSAR operatives, respectively. He encouraged them to continue with the excellent work, while promising that the Service would continue to provide them with the required support to position the NAF Regiment as an elite fighting force.

Earlier in his welcome remarks, the AOC GTC stated that the curriculum of the SF Course entailed intensive training in shooting skills, unarmed combat, navigation, field tactics, communications, endurance and combat swimming, amongst others. He disclosed that the trainees were also taught to operate the Ruchnaya Granata Distantsionnaya (RGD-5) grenade, PKM gun and the Rocket Propelled Grenade (RPG 7) launcher which were recently acquired by the present NAF Administration. According to him, the courses were intentionally tailored to ensure that the SF and CSAR operatives could withstand the grueling physical conditions of ground operations. He disclosed that, of the 275 personnel screened for SF Course 6/2020, only 117 were inaugurated to start the course, while 94 personnel, comprising 5 officers and 89 airmen and airwomen graduated, indicating a success rate of about 50 per cent. Similarly, the AOC remarked that 35 personnel, comprising 5 officers and 30 airmen, were initially nominated for the CSAR Course 2/2020 and only 32 students completed the requirements to be CSAR operators. “Hence, only the fittest trainees equipped with the right attitude were able to complete the course to qualify as SF (Panthers) and CSAR operators of the NAF”, he said.

Highlights of the graduation ceremony were tactical demonstrations by the graduating students and other SF personnel. These included a maritime assault demonstration at the newly commissioned Pool; an obstacle crossing demonstration by NAF SF personnel as well as a KRAV MAGA (unarmed combat drill) demonstration. There was also an air-ground assault simulation exercise, which featured the rappelling of a joint SF and CSAR Team from an Mi-171E Helicopter into a hostile environment to rescue a downed pilot, which was executed with precision to the delight of all present. Awards were also presented to graduating students who had distinguished themselves on the 2 Courses.

Also present at the ceremony were the host, the AOC SOC, along with Branch Chiefs from Headquarters NAF as well as Commanders and Commandants of Nigerian Army and NAF Formations in Bauchi.