Home Security My Wife is Possessed- Says Husband of Mother who Killed her Children... 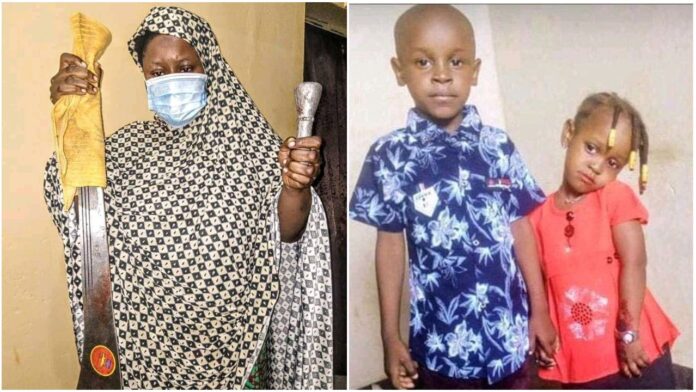 Husband of the kano based Housewife who allegedly stabbed her biological children to death has disclosed that the woman was ‘possessed.’

The housewife, Hauwa Habibu allegedly killed the children over alleged jealousy because her husband, Ibrahim Haruna Aminu, 39, married a second wife. The deceased children were identified as a boy Yusuf, 5-, and girl Zahra’u, 3.

In an audio recording obtained by Arewa Agenda, the husband said that the suspect had called him in the morning at exactly 9:55am and told him that some people had come to kill her. When he asked who were the killers, she said they were two males and one female. When he sought to know where his children were, she told him it was the children who wanted to kill her.

“So, I urged her to intensify prayers because the previous night I sensed that her interactions were abnormal, as if she was somehow possessed as she was saying strange things. I promised to be with her when the rain stopped. Five minutes later she called again that the children wanted to speak with me. I spoke to all of them as they requested for some sweet which I asked her to give them.

Mr. Ibrahim narrated that when he got home after greeting his parents, he went straight to his apartment but was greeted with silence. He then used his key and unlocked the door, that was when he met the shock of his life, his children laying in a pool of their own blood.

The eldest child who survived the incident told him that their mother killed the two children with matchet and fled after she locked the door.

“So I quickly went to my parents and informed them, took the victims to the hospital while I rushed to my in-law’s place. On getting there I met my wife and her mother in the room discussing. When I narrated what happened, her mother started crying while my wife was asking me what was happening?”

When asked why he thought his wife did what she did, Ibrahim simply replied, “She is possessed. A normal woman would not just hack her own children to death for no reason.”

Asked if she had initially shown any tendency prior to the incidence, he replied, “Not at all. Only that a day before the incidence since when I went to give her money for food stuff she held my cloth and kept asking if I was okay, I asked why she was asking such questions, she said nothing, just that she is seeing things but she doesn’t know what they were. I then calmed her down and assured her I would come over the following morning since I was going to sleep at my second wife’s place.”

Medical Practitioners Speak Out:
Meanwhile a renowned Medical Practitioner and paediatrician at the National Hospital Abuja, Dr. Denis Shatima said that from a general medical point of view, the suspect might have developed some form of depression that manifested in ‘hating’ others around her including those she gave birth to. Mothers are always very protective of their children.

“She can interpret them as being foreigners,” he said.

Also speaking on the same vein, Shuaibu Ibrahim of the Federal Medical Centre, Katsina, said: “It not possible for a woman in her full senses to kill her children no matter what must have happened. It could make sense to extremely jealous partners to her their rivals whether their spouses or new partners to their spouses instead if she was in her full senses. Definitely the scenario will be that this woman because of one reason or the other developed depression and from that there was nobody to bring her out of it and she developed suicidal ideas and feelings as a sign and symptom of depression that she is worthless and nobody cares about her and nothing is valuable to her again and she wants to kill herself and the people close to her because she feels lonely and all that. From there, psychiatric conditions will occur, and she can be able to do what she did. That is the way I look at it.”

Not Far from Depression – Depression victim
A mother of two, Journalist and Film Editor in Kannywood, Amina Adam Yusuf, has attributed the incidence to depression.

Speaking to Arewa Agenda, Aminu asserted that a lot of women in the North are going through depression but they don’t open up, even if they do, they are soldem understood because of the nature of the society.

Amina who was once a victim of depression stated that once it gets to a certain stage victim are prone to doing strange things.

“I was once a victim of depression. There was a time that I tried to kill myself. Luckily for me I was in Europe and it was the doctors who identified that I was depressed and I got all the necessary help I needed. But here how many of us even admit to being depressed, we don’t even know what depression is. Most of all the things we attribute to spiritual possession sometimes is depression because once you are depressed it is your mind that will be playing and will push you to do things under the illusion that you will find peace when you do them.”

Police Nab Suspect:
Meanwhile, the police in Kano State have arrested the suspect. The police spokesperson in Kano, Abdullahi Haruna confirmed the arrest in a statement.

The spokesperson said the suspect was arrested on the same date at about 2250hrs.

Mr Haruna said while on preliminary investigations, the suspect confessed to having locked up the children in their house while she used a machete to attack them.

He added that the Police Command has transferred the case to State Criminal Investigations Department (SCID) for discreet investigation.