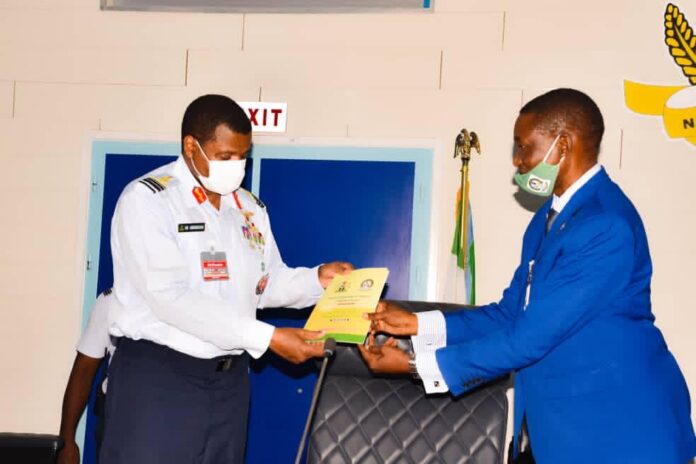 The Institute of Safety Professionals of Nigeria (ISPON) has commended the Nigerian Air Force (NAF) for its efforts at encouraging and sustaining global best safety practices in the conduct of its operations, while seeking a deeper partnership to promote an enduring safety culture in the Country.

The President ISPON, Dr Yusuf Haruna Malgwi, made this known today, 25 November 2020, when he led some executive members of the Institute on a courtesy visit to the Chief of the Air Staff (CAS), Air Marshal Sadique Abubakar, at Headquarters NAF, Abuja. The President of the Institute, who lauded the CAS for his efforts at ensuring that the NAF Institute of Safety (NAFIS) Kaduna becomes a Centre of Excellence for safety training, also commended the NAF for the giant strides recorded in the fight against terrorism and armed banditry.

Speaking further, Dr Malgwi disclosed that NAFIS had been admitted as a corporate member of ISPON, in compliance with the ISPON Act 2014 as well as in furtherance of the growing synergy between the Institute and the NAF. He noted also, that ISPON had facilitated training and conducted membership examination for about 240 NAF officers who were only awaiting their formal induction into the Institute. He further disclosed that ISPON was willing to upscale its collaboration with the NAF by further consolidating the existing relationship with NAFIS to accredit all its Safety Management courses and verify its Instructors’ competencies. He pointed out, however, that the desired consolidation would require formal approval of the MOU between ISPON and NAFIS as well as the regularization of ISPON membership for NAF Safety Officers. Dr Haruna averred that the Institute was also very willing to engage in joint research programmes in contemporary areas of identified safety needs in NAF formations across the Country.

While responding, the CAS expressed his delight at hosting the ISPON President and congratulated him for promoting enhanced safety culture in Nigeria. He added that the NAF, being a highly-technical Service, was very concerned about safety of airport facilities and air operations, which informed the decision to establish NAFIS. He therefore assured the ISPON President of the NAF’s willingness to partner with the Institute to further upgrade scholarship in Safety Management at NAFIS. Accordingly, the CAS directed the NAF Standards and Evaluation Branch to identify and clearly articulate all areas of partnership with ISPON. He noted that one of such areas was the need to domesticate flight safety training. This, he said, was because most training in flight safety was conducted  overseas with huge foreign exchange outlay. This, he further noted, could be minimized through the partnership between the NAF and ISPON, if a proper framework is established. The CAS accordingly directed that all trained NAF Safety Officers – pilots and non-pilots – were to register as members of ISPON without further delay.

Air Marshal Abubakar subsequently identified independent safety audits as another possible area of collaboration, where ISPON could, from time to time, conduct independent safety evaluation of processes and procedures in NAF units to ensure safer air operations. The CAS also emphasized the need for the Institute to be more involved and conduct safety education in NAF secondary schools by speaking to the students, even if on a quarterly basis. The CAS also identified the area of additional training and joint courses at NAFIS with ISPON, which would be open for other agencies to also benefit. To this end, he disclosed, the NAF was working towards expanding accommodation and other facilities at NAFIS.

While highlighting that the NAF currently operates under very challenging circumstances, with scarce resources and increasing demands to deliver, the CAS noted that the NAF needed to ensure safety of personnel and equipment for effective and efficient service delivery. “We want to make sure that whatever resources we have are conserved so that we can use them to protect Nigeria and provide security for our people”, the CAS said. He emphasized that the NAF, in collaboration with sister Services and other security agencies, was working round the clock to deal with the security challenges facing the Nation. According to him, security is everybody’s business and ISPON has a role to play in contributing towards safe air operations.

ISPON was formally established by an Act of the National Assembly in 2014 (Act No 2), with the objective of organizing and providing professional training in Safety Management as well as setting standards of practice and determining knowledge and skills to be acquired by persons seeking to register and practice as safety professionals in Nigeria, amongst others.

Also present at the occasion were HQ NAF Branch Chiefs and Directors as well as the Commandant NAFIS.