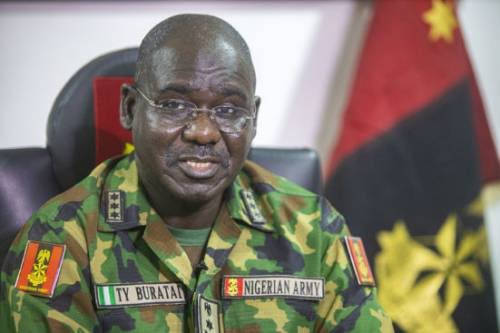 The Nigerian Army, as a matter of constitutional obligation, is constantly involved in internal security operations across the country. This has been a recurring engagement for the army given the harvest of security challenges bedeviling the country since independence. It therefore means that the military must also be challenged by how it can effectively manage its relationship and interactions with the civilian population particularly the communities where it is based or deployed for internal security operations.

The reality is that while exercising its statutory responsibilities, it is obvious that a certain level of interaction must take place between members of the Nigerian Army and the civil populace. This is in spite of the fact that both of them possess characteristics that are quite different from each other in terms of organizational structure, orientation, modus operandi and response to control. It is trite that the military is controlled by the political authority and is often deployed to perform roles that involve use of force and coercion in order to achieve a set objective, like conflict resolution or restoration of peace and security in the society.

In the course of doing this, a section of the public might kick against their presence for different reasons which might include a failure on the part of some personnel, being subject to human imperfections, may be accused of bias or excessive use of force. On the other hand, cases abound where there are obvious provocation of military personnel in operation by the civilian community. What this then means is that the source of friction, mutual distrust and suspicion that occur in the course of this inevitable interaction between the civilians and the military in a particular milieu of operation, could be located in either side of the divide. What is important however is to find an effective way of ‘winning hearts and minds’ with a view to evolving better relations between civilians and the military for the good of our nation and people.

The indisputable fact is that civil-military relations in Nigeria is improving and daily gaining traction as the current leadership of the Army is not leaving any stone unturned to ensure that its personnel and operations adhere strictly to their code of conduct and rules of engagement.
Since assumption of office as the Chief of Army Staff, Lt Gen Tukur Buratai has placed civil-military relations in the front burner. As an accomplished military strategist, he understands the indispensability of a healthy civil-military relationship, especially in times like these when the Nigerian military, apart from the war against the Boko Haram terrorists it is prosecuting in the north east, is engaged in multiplicity of internal security operations. Gen Buratai has demonstrated his belief that civil-military relations transcends information management, and that it demands the highest level of community relations’ competencies and actions that involve effective communication, respect for human rights, rule of law, negotiation and conflict management skills, accountability as well as responsiveness. According to him, “You can win the war but how do you win the peace if not by winning the hearts and minds of the people”.

In effort to always win the hearts and minds of the Nigerians, especially people in the communities where troops are deployed for internal security operations, the Nigerian Army under the superintendence of Gen Buratai most often embarks on a number of quick impact projects and humanitarian services aimed at ameliorating the sufferings and hardships of civilians occasioned by the crisis in their area.

Under Buratai, the Army have built clinics and provided medical services, constructed schools, roads and bridges and sunk boreholes and cleared gutters, and so on, for various communities across the country where they were either deployed or domiciled. And to assure the public of its determination to stamp out incidences of human right abuses by overzealousness military personnel, Human Right Desks were established and strengthened to investigate reported cases of such infractions.

Yes, there has been occasional reports of misuse of power or overzealousness of military personnel, especially at the lower cadre level, the conscious effort of the authorities to reassure the public of its commitment to professionalism by prompt sanctioning of erring personnel, are not lost on the public. A case in point was the vexatious mistreatment of a crippled man in Onitsha by a couple of soldiers for wearing military camouflage. On receiving the report, the Army authority promptly arrested the erring soldiers; court marshaled them and sentenced them for their gross misconduct. The prompt action of the Army authority in such matters underscores its determination to match words with action in matters that has the capacity to strain the cherished relationship with the civil populace.

Without any doubt, the relationship between the military and the media is one of the pillars of civil-military relations. This supposition is underpinned by the fact that both institutions – media and the military- are significantly indispensable in the progressive running of any society.

They indeed play different roles and might see things from different point of view but in the matters of national security, peace and progress, they must understand, promote, protect and appreciate each other as partners in progress and co-stakeholders in the overriding task of nation building. Gen Buratai has also shown tremendous understanding of this fact and has shown unquantifiable level of respect to the fourth estate of the realm. In spite of the stinging reports and unsubstantiated stories against the Army Chief which a section of the press has made a past time, he has characteristically shown restraint and professionalism in relating with the media. He had rather sought ways that will bridge the communication gap between the two critical institutions, to push further the search for enduring partnership and by extension, civil-military relations.

Without doubt, instances abound when the relationship between the media and the military was strained, due to some lacuna or communication gap or even overzealousness on the part of either of the parties, or arising from the nature of their jobs; but the good thing is that at the end of the day, there is always a deliberate and conscious effort of the military to want to amend the relationship knowing that it can only reach the civil populace better and more effectively through the media.

I wish this exceptional General all the best as he celebrates his birthday this week.