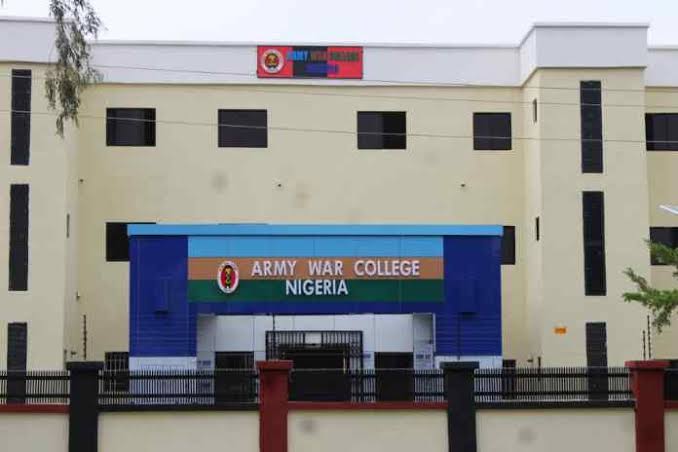 The Army War College Nigeria has graduated a total of 65 military and paramilitary senior officers who were members of its Course 4/2020.

They comprise 55 Colonels and Lieutenant Colonels of the Nigerian Army, two Wing Commanders of the Nigerian Air Force (NAF), one Assistant Commissioner of Police (ACP) of the Nigeria Police Force (NPF), two senior detectives of the Economic and Financial Crimes Commission (EFCC), and one senior officer each from both the Federal Road Safety Corps (FRSC) and the Nigeria Security and Civil Defence Corps (NSCDC).

They were all inducted as Fellows of the War College at a graduation ceremony held inside the TY Buratai Auditorium, at WU Bassey Barracks, in Abuja.

Magashi, the Minister of Defence, acknowledged the growing strides been recorded by the Army War College within the short time of its establishment, urging the participants to bring to bare in their duties the requisite knowledge and training they may have gained during the course.

“To our graduands and future operational level commanders, I must say that it is your responsibility to understand and situate yourself in the ever-changing character of conflicts and the complexities of the global contemporary security environment.

“lt is therefore, my firm belief, that upholding the standards set for this level of training would develop the much needed capacity to overcome our current and future security challenges as a nation,” he said.

In his remark, Maj. Gen. Solomon Effiong Odounwa, Commandant of the College, said Army War Colleges, world over, l are higher military learning institutions which hold the pride of place as centres of excellence for military professionalism and operational level leadership training.

He said that in just about 4 years after the establishment of the Naval War College Nigeria, the College has imbibed global best practices and universal values in the conduct of training across the spectrum of its course modules.

“This is bearing in mind that the learning objectives of the institution are built around national security, military strategy, theatre strategy and operational art,” Maj. Gen. Odounwa added.

A Colonel with the Nigerian Army, Mr. Baba Buhari, emerged as the ‘Overall Best Participant’ of the War College Course 4/2020.

Col. Buhari, who was the Course President, was also announced as the participant with the ‘Best Paper’.

He received the Chief of Army Staff, ‘COAS Golden Award’ for coming tops among his course mates.