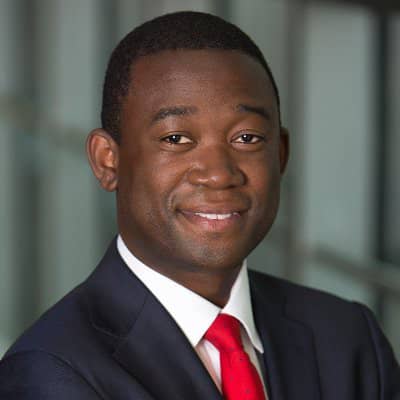 NIDCOM Excited over Wally’s Nomination for US Treasury, CBN Diaspora Forex Policy
Hon. Abike Dabiri-Erewa, Chairman/CEO, Nigerians in Diaspora Commission (NIDCOM) has congratulated Nigerian-  born  Adewale Adeyemo on his nomination by the US President-Elect Joe Biden as the US Deputy Treasury
Secretary.
“Wally” Adeyemo, who was a former senior international economic adviser during the Obama administration has spent his career working with organizations that are at the intersection of public policy, the private sector and non-profits focused on creating economic opportunity.
In a congratulatory message, Dabiri-Erewa said that Adeyemo’s nomination by the US President-Elect will make him the first-ever black person to be the Deputy Secretary of the USA Treasury.
The NIDCOM boss acknowledged that Adeyemo’s nomination is not surprising going by the success he attained in the various positions he held before now.
She wished Adeyemo a  smooth, flawless senate confirmation and unparalleled success on his new job.
Adeyemo, before working in the Obama Administration, was working as Editor at Hamilton Project where he worked as Senior Adviser and Deputy Chief of staff to Jack Lew of United States Department of Treasury.
He currently serves as the President of the Obama foundation but before his appointment as the President of the Obama Foundation, he has served in various positions in the Obama administration.
He was the deputy director of the National Economic Council; The assistant Secretary for the international markets and development at the Treasury Department; Deputy Chief of Staff of the Treasury department in 2012;  Chief of staff of the Consumer Financial Protection Bureau in
2010.
Adeyemo got his Degree from the University of California, Berkeley and his Juris Doctor from Yale Law School.
Meanwhile, NIDCOM has also commended the Central Bank of Nigeria (CBN) for its newly adopted policy, to grant unfettered Access to Forex from Diaspora Remittances.
The Chairman/CEO Nigerians in Diaspora Commission,  Hon. Abike Dabiri-Erewa, gave the commendation while hosting the first Honorary Consul of Columbia to Nigeria, Her Excellency, Hon. Maricel Romero Cantillo during a courtesy visit to the Commission in Abuja.
The NIDCOM Boss said Nigerians in the diaspora are happy with the policy which will ultimately impact positively on diaspora remittances and Investments in Nigeria, saying the Commission has already set up a process to set up the Nigerian Diaspora Investment Trust Fund.
She also stated that beneficiaries of remittances by Nigerians in the Diaspora will get their money in the currency of transmission, rather than in naira, and advised them to patronize registered bureau de change legally in operation while urging the CBN to further reduce the levies
charged by IMTOs on remittances, with that of Nigeria being the highest in the world.
Dabiri-Erewa said she was happy to receive Columbia’s first honorary consul to Nigeria and said it was an opportunity to engage Nigerians in Columbia and Colombians in Nigeria, to deepen cultural and trade relations.
In her remarks, Hon. Maricel Romero Cantillo expressed her excitement to be the first Honorary Colombia Consul to Nigeria, as she believes this will strengthen the ties between Nigeria and Columbia.
Cantillo said she is hopeful for the future and  looks forward to strengthening commercial and cultural ties between both countries, saying Columbia is a home for Nigerians and vice versa
She added that Nigeria and Columbia share a lot of cultural similarities and encouraged the NIDCOM Boss to make plans to engage the Nigerian Community in Columbia as Nigerians are an asset to their host country.
E -Signed.
Abdur-Rahman Balogun
Head of Media and Public Relations Unit (NIDCOM) Abuja