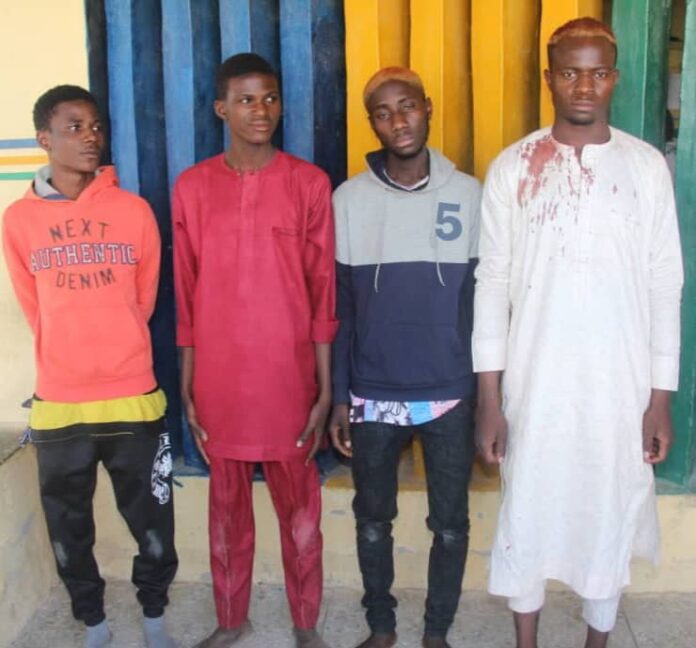 Arrest of four suspects of Criminal Conspiracy, Armed Robbery and Recovery of Two (2) locally made Revolver pistols and 17 live Ammunition.

On the 31/12/2020 at about 0000hrs, A patrol team led by DPO D’ Division arrested one Idris Yakubu M’ 18yrs of Federal Low cost, Layin Ansar, Bauchi with a Locally made Revolver pistol loaded with seventeen (17) rounds of live ammunition in the house of one Alhaji Garba Bello of Makama New extension, Bauchi. While trying to Rob him, the Armed Robber fired twice in the house before he was arrested. During interrogation, he confessed to have his Gang members. In Larema Hotel.

2. Consequently, based on useful information given by the 1st suspect led to the arrest of one Umar Abdullahi ‘m’ aged 19yrs of Feguna, Plateau State, Hassan Lawal aged 18yrs and Sadik Illyas aged 18yrs of Katako Junction, Jos, Plateau State with one (1) locally made pistol and two (2) cartridges in their possession. Investigations revealed that they belong to a cult group named ”Bager” investigation is in progress after which the suspects will be profile and charge to court for prosecution/possible conviction.

3. On the 30/12/2020 at about 1720 hrs one Hafsatu Wada ‘F’ of zango jama’are LGA reported at jama’are police station that her niece Safarau Mohammed (not real name) ‘f‘ aged 6yrs of the same address was found crying in a pool of blood. Upon receipt of the complaint, patrol team led by the DPO Jama’are Division visited the scene and the victim was rushed to General Hospital Jama’are where the Doctor confirmed that her private part has been cut off with a sharp object; the victim was immediately referred to FMC Azare for more medical response.

4. During investigation, One Adamu Abdul Ra’uf aged 20yrs of Gandu Jama’are was arrested.

5. On interrogation, the suspect freely confessed to have conspired with one Abdulkadir wada haladu of Chikamidari area of jama’are to perpetrate the crime.

6. The said Abdulkadir is currently at large but necessary measures put in place for possible and immediate apprehension. Meanwhile, investigation is still on going.

7. The Commissioner of Police CP Lawan Tanko Jimeta directed that the case to be transferred to SCID for discreet investigation.

8. Finally, the Command calls on members of the public to continue given useful information to the Police in combating crime and criminality in the state and report any incident to the nearest Police Station immediately for necessary action.