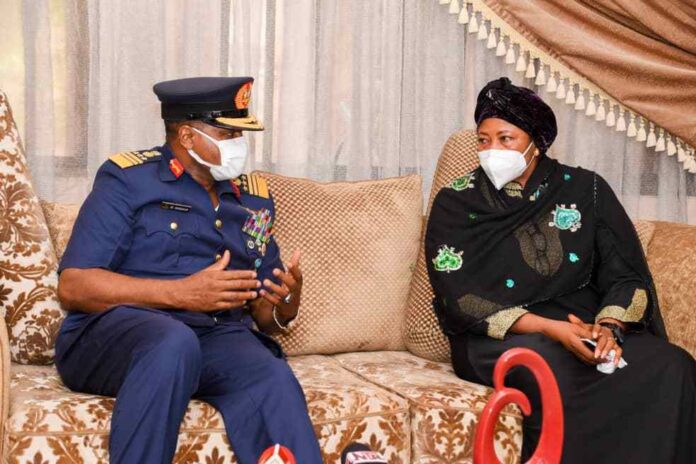 The Chief of the Air Staff (CAS), Air Marshal Sadique Abubakar, today, 9 January 2021, paid a condolence visit to the family of late Air Marshal Nsikak-Abasi Essien Eduok. The late senior officer, who died on 6 January 2021 at a hospital in Uyo, Akwa-Ibom State where he was receiving treatment, was the 12th CAS. Air Marshal Abubakar, who was received by the deceased’s spouse, Mrs Uduak Nsikak Eduok, lauded the sterling virtues of the late former CAS, stating that he was an exceptional General who contributed significantly to the development of the Nigerian Air Force (NAF). The CAS also paid a condolence visit to the Akwa Ibom Government House to commiserate with the Executive Governor of the State, Mr Udom Emmanuel, over the sad demise of the late Air Marshal, who was also a former Minister of Aviation.

Speaking during the visit at the Government House, Air Marshal Abubakar expressed sadness over the tragic exit of late Air Marshal Nsikak Eduok. He condoled with the Governor and the good people of Akwa Ibom State on the loss of the former CAS, who, according to him, was a great fighter Pilot and one time Directing Staff at the Armed Forces Command and Staff College, Jaji. Air Marshal Abubakar described late Air Marshal Nsikak Eduok as a great General whose transformational approach to leadership tremendously impacted on the development of the NAF. “Some of us that had the privilege of working under him, even though as a Detachment Commander, which was a very small command appointment then, had the privilege to see him in action. The General, like I said earlier, contributed significantly to what we have today as an Air Force. What those that came after him, including me, have done is just to build on the foundation that he laid.”

Air Marshal Abubakar disclosed that, even in retirement, the late former CAS continued to make invaluable contributions to the development of the Service, with significant inputs on how to restructure the Air Force to make it more effective in dealing with contemporary security challenges facing the Country. “I have just paid a condolence visit to the family where I assured them that the NAF will be with them in preparation for his burial and we will work closely together with the family to ensure that this great Nigerian is given a befitting burial. That is why we are here this morning, and I want to thank you most sincerely for all your support to the family and to him while he was sick. But life is in the hands of God Almighty. We can only continue to praise God for what He has done for him, his family and for all of us”, he added.

In his response, the Executive Governor of Akwa Ibom State, Mr Udom Emmanuel, thanked the CAS for his swift response to the recent tragic loss to the State, by leading a delegation of Generals and officers to the State on a condolence visit. According to the Governor, the gesture was indicative of a good heart and sincere concern for the bereaved. The Governor observed that it is at such critical moments that one knows who his true friends are. He assured the CAS that his visit has gone a long way towards consolidating their relationship and brotherhood.

Speaking further, the Governor disclosed that the challenge with the late CAS’ health started about 2 to 3 years ago and everything was done to keep him alive, but the will of the Almighty prevailed. “It is a big tragedy and a huge loss to the State, especially when we have to lose two senior Air Force Officers within 2 weeks, the other being the first indigenous Military Administrator of this State, Air Commodore Idongesit Nkanga (retired), who passed away on Christmas eve. We were just mourning him and then this great gentleman, a very good adviser to this government, Air Marshal Eduok, also passed on. So you can imagine how we are feeling but we cannot question God because the secret things belong to him”, the Governor stated.

The CAS was accompanied on the condolence visits by the NAF Chief of Accounts and Budget, Air Vice Marshal (AVM) Clement Ogbeche; Chief of Training and Operations, AVM James Gwani; Chief of Staff, Mobility Command, AVM HB Abubakar, as well as other senior militray officers.