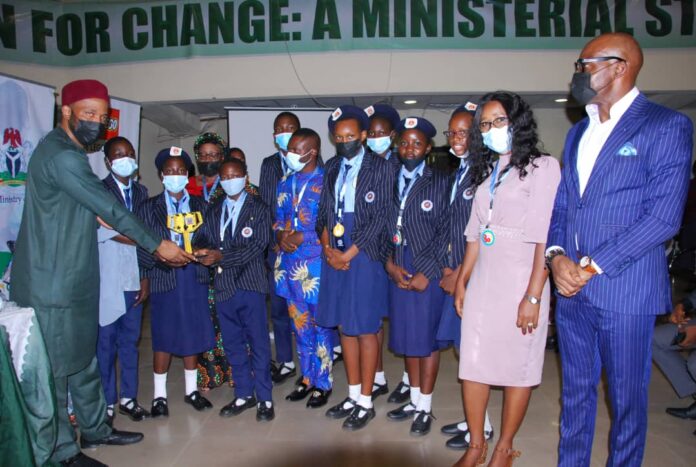 The winners of the First Lego League (FLL) National Robotics Championship Competition 2021 have emerged after 24 teams drawn from the Federal Unity Colleges qualified.

The teams were selected after a competitive zonal championship held in Lagos and Kano before the eventual emergence of the winners.

The Championship which was organised by Coderina Education and Technology Foundation in collaboration with the Federal Ministry of Education had participation of 104 Federal Unity Colleges.

Tech Digest gathered that each winner was awarded with  First Tech Challenge (FTC) Robotic equipments worth $5,000 and also presented with trophies and medals at award ceremony which took place at Federal Ministry of Science and technology complex, Abuja.

The first and second place winners would also represent Nigeria in the forthcoming Global Robotic Championship Competition scheduled to take place in Greece.

Two teachers were also presented with laptops for outstanding performance.

Speaking on the project, the Director, Technology and Science Education, Federal Ministry of Education, Mrs. Elizabeth Adedigba, said the objective of the Championship was to expose the children to 21st Century technology and skills.

“The Ministry is aware of the fact that the world does not wait for anybody and artificial intelligence is gaining ground across sectors.

“The Federal Unity Colleges, being model schools, we have to start with the children to acquire the skills and boost their creative insights, innovation and team work progression such that they can build it in them right from this stage.

“We are equipping them for the challenges of the future and the workplace of the future. We can’t afford to leave our students untutored along this line because we want them to be globally competitive, entrepreneurs.

“We want jobs to look for them; the reverse shouldn’t be the case,” Adedigba said.

Chairperson of the Principals of 104 Federal Unity Colleges in Nigeria, Mrs. Tokumbo Yakubu-Oyinloye, said, “The future of science and technology in Nigeria is very bright, especially with what I have seen here today. You can see talents and potential in display. Our children are living up to the tasks.”

Coderina is an independent non-profit ed-tech organisation that works to promote ICT development, youth innovation and entrepreneurship in Africa.

The Championship was supported by SAP, FIRST; NITDA; Ford and DOW.