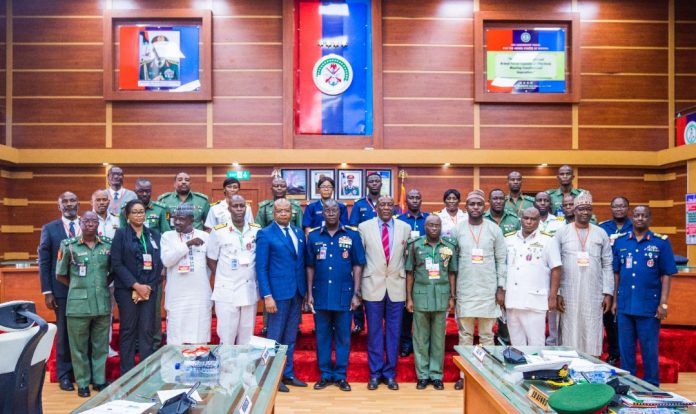 The Defence Headquarters has organised a capacity building workshop on conflict-sensitive communication and strategic media relations for public relations and information officers in the Armed Forces of Nigeria.

The Chief of Defence Staff, General Lucky Irabor, said the training workshop was aimed at further expanding the knowledge base of the officers.

Irabor was represented by the Chief of Defence Policy and Plans, Air Vice Marshal Dahiru Sanda, at the workshop, with the theme: “Proactive Conflict Sensitive Communication and Defence Information: Emerging Issues and Strategies in Media Relations.”

He said the training was designed to broaden the horizon of officers on the evolving techniques and strategies in media relations geared towards positive defence information management.

The CDS said it was in furtherance of his leadership focus of fostering a professional armed force capable of effectively meeting constitutional imperatives.

According to him, the workshop is critical in their resolve to ensure that public relations and information officers are able to meet up with current and future realities of defence information management.

Irabor said military spokespersons must be well trained and proactive in the management of public information and communication during conflict and peacetime within the ambits of acceptable global standards.

He said: “It is my belief that this workshop will equally facilitate the advancement of a proactive and responsive approach that would bring about the much-needed harmonisation of media relations strategy and communication management in our armed forces.

“Therefore, I implore our military spokespersons to continue to leverage on the various communication techniques and platforms to effectively tell the story of the Nigerian armed forces in a bid to elevate the trust and confidence of the civilian populace.

“This will help in deterring current and potential adversaries within and outside the shores of Nigeria as well as mitigate misinformation and disinformation on military operations.”

The facilitator of the workshop and Chief Executive Officer, Media Today International, Charles Odenigbo, said the military must develop strategy to be able to proactively feed the public with timely and accurate information on its activities.

Odenigbo said inaccurate or lack of information could give room to speculation and fake news to thrive, adding that it was dangerous for the country considering the current situation.

He said the armed forces were currently confronting various challenges across the country, saying that the media needed to work with the military to give out the right news.

He said there was the need for the military information managers to move from being reactive to proactive to be able to appeal to people’s consciousness.

According to him, Nigerians are very conscious either positive or negative and man’s consciousness is his property, expression, identity and what he believes and stands for.

Odenigbo said: “Where there is a relationship between the civilians and the military, communication will have to be conflict sensitive because we are faced with our own citizens raising arms against their own nation.

“In a situation of this nature, bullets kill an idea in the head of a man because once an idea spreads, it will be difficult to handle.

“It is important that every information that the DHQ is pushing out must appeal to the consciousness of the people.”

A resource person, Dr. Okey Ikechukwu, said there was the need for the military to be conscious of what could lead to conflict and work deliberately and systematically towards avoiding words, actions and public conduct and information output that could generate negative reactions.

Ikechukwu said the military must have a relationship with the media with a view to ensuring that accurate and positive information were disseminated to the public.

According to him, proactive strategies anticipate challenges, threats and opportunities, reduce the likelihood of unpleasant outcomes, or challenging behaviour and focus on the conditions that precede the behaviour.

Also speaking on “Issues Management and Fact-Checking in Media Relations,” the Editor-in-Chief of PRNigeria, Mr. Yushau A. Shuaib said for effective media relations, spokespersons must realise the importance of crisis management, issue management and reputation management.

He said while crisis management is a reactive response, Issues management is a principal focus on techniques for anticipating, planning and proactively managing issues to minimize negative impact before it snowballs into any crisis.

“A good reputation is built over time not overnight and is an organization’s greatest asset. For reputation management, It has to be carefully cultivated and nurtured because it represents the general perception on an organization,” Shuaib said.

The Deputy Director, Defence Information, Air Commodore Wap Maigida, said that sensitive communication strategy remained part and parcel of the information management system, adding that militaries across the globe had continue to deploy the needed communication strategies in the quest to manage conflicts.

He said the training workshop was designed to acquaint military spokesperson on how best to harness military/media relations for the interest of peace and national security.
According to him, it is pertinent for public relations officers to be able to analyse operational engagements of the services.