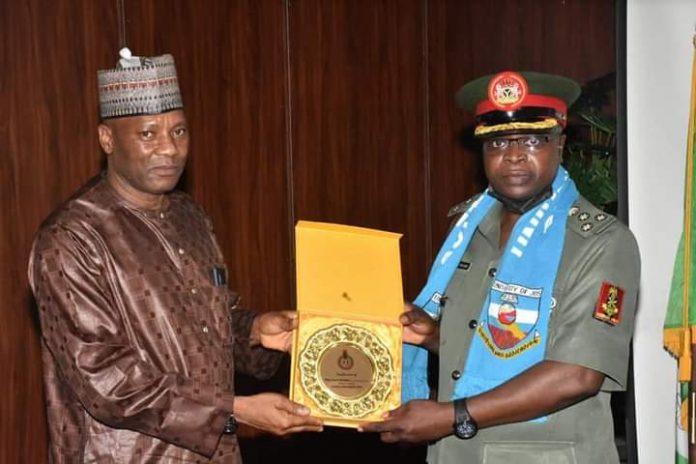 The NYSC Director General, Brigadier General Shuaibu Ibrahim has been presented an Award of Excellence by the University of Jos Alumni Association.

This, the University said was in recognition of his tremendous achievements since assuming duty as the 18th Director-General of the National Youth Service Corps over two years ago.

Speaking during the award presentation today, the University of Jos Vice-Chancellor Designate, Prof. Ishaya Tanko extoled the sterling leadership qualities of the Director-General, adding that Unijos has been observing his transformational achievements in the Scheme.

He commended General Ibrahim for the uncommon feat, adding that the award bestowed on him was also in recognition of his undaunting commitment to national development by tapping Corps potentials.

The VC designate while presenting the goodwill message from the Senate, Management, Staff and Students of Unijos added that the institution recognizes the relevance of the NYSC Scheme to overall national development.

Prof Tanko stated further that universities are made stronger by the strength of their alumni adding that, “we will seek every opportunity to strenghten the synergy of all Unijos alumni to strenghten the institution”.

The National President, Unijos Alumni, Pastor Nuhu Sani described the Director-General as a good ambassador of the university, urging him to keep up the good work he is doing.

“Graduates of Unijos are making us proud and we will keep telling the world about them”, he said.

He said the Alumni would continue to harness the ingenuinety of NYSC Director-General and other alumni of the University of Jos for the benefit of humanity.

“We will continue to pray for your successful tenure of office and also in future assignments” he said.

In his response, Brigadier General Shuaibu lbrahim congratulated the Vice-Chancellor designate on his appointment.

He stated that he is proud of the University of Jos because the institution has impacted his life and others positively.

Ibrahim lauded the management of the institution for reaching out to its alumni, saying, “l am so proud of the university”.

He assured the management of the University of Jos of his continuous support.

He added that the award would spur him for greater achievements.

He said the Scheme always thinks outside the box, and would leverage on the potentials of Corps Members for national development.

“Last year the NYSC generated over two hundred and eighty million Naira which we paid into the federation account.

This year we also realised five hundred and eleven million Naira which we equally paid into the Federation Account and we are determined that by next year we are going to generate more”, he said.

The DG said NYSC had partnered many institutions towards empowering Corps Members for self-reliance.

He listed the Bank of Industry, Central Bank of Nigera, Heritage Bank, Access Bank among others as institutions that offer start up capitals for Corps Members to finance their business proposals.

He also said efforts are in top gear with strong advocacy for the establishment of NYSC Trust Fund, which if actualised will enable Corps Members to have access to start-up captitals to finance their business ideas as they exit service.

The Director-General said NYSC film, NYSC National Cultural Troupe are some of the innovations introduced into the NYSC Scheme for the enhancement of Corps potentials for greater output.