Home Security Cautious Jubilation Over Rumoured Death Of Top Ranking Terrorist Commander
As the battle to annihilate boko haram terrorists in the north east parts of the country intensifies with Nigerian troops in conjunction with allied forces from neighbouring countries gaining the upper hand, there is suppressed excitement about the reported death of a top ranking leader of the terrorists operating in the region.
PRNigeria sources at the frontline reported that the leader was a casualty of the ongoing heavy air bombardment from warplanes while clearing the way for the ground troops of multinational task force to move into some towns near one of the boarders.
A couple of weeks ago the military high command had obtained approval of political authorities in Abuja to go all out and clear the region of insurgency before the February general elections.
At a period when massive operations were to start however, the terrorists carried out simultaneous desperate and diversionary attacks on Maiduguri, Konduga and Monguno to both delay the commencement of planned military offensive and allow for the escape of their commanders holed around the axis.
Despite this however, the operations commenced and has been fierce with the cooperation of Chad, Niger and Cameroon who are all Nigeria’s neighbours leading to the capture of many towns and villages previously infested by the terrorists.
Some of the towns include Gamboru-Ngala, Malamfatori, Abadam, Kirawa and Ashigashiya and Michika while the liberation of Gwaoza, Gulak and others may be announced any moment from now.
During these battles, some of the weapons captured from troops when the terrorists overran Baga, headquarters of the International Joint Task Force some weeks ago were recovered by Nigerian fighters.
It would be recalled that a leader of Boko Haram had in a video released shortly after the Baga attack boasted that his band captured world class sophisticated weaponry from Nigerian troops who he referred to as cowards.
Among the recovered weapons is a Battle Armoured Tank equipped with comprehensive protective system and maximum firing distance and accuracy with anti-aircraft rotating mount. Its fire accuracy is attained by range-finder, ballistic computer with a thermal barrel sleeve.
Several other weapons, arms and ammunition including variety of armoured vehicles and artillery guns as well as several Hilux vehicles were also captured from them.
However, a reliable security source confirmed the death of the top ranking leader during the air raid, but which authenticity was still being investigated by military authorities.
The leader was one of the senior officers in Boko Haram command to late founder of the group, Muhammed Yusuf.
When contacted, Defence Spokesperson, Major General Chris Olukolade declined to comment on the authenticity or otherwise of the report saying “as far as we are concerned, anybody that is associated with terrorism is a target and right now, we have a task of cleaning up the entire boko haram infested region and returning peace to the country.
One of the leaders of Boko Haram whose death has been controversial is Shekau. On 19 August 2013, the Joint Task Force (JTF) had announced the death of Shekau. They claimed he died of gunshots wounds received in an encounter with the JTF in one of their camps in Sambisa Forest on June 30, 2013. He was said to be mortally wounded in the encounter and was sneaked into Amitchide-a border community in Cameroon for treatment from which he never recovered.
Many months later, another character appeared in a video claiming to be Shekau but having different mannerisms, gait and character from the original Shekau.
Incidentally, the reign of this Shekau, termed Abubakar Shekau 11 by security sources, was short-lived as he was reportedly killed in a shootout with Nigerian troops in Konduga on Wednesday September 17, 2014.
Although video and still shots of the encounter were provided by military and independent sources, another character yet appeared in another video shortly afterwards, claiming to still be Abubakar Shekau. Military and security sources referred to him as Abubakar Shekau 111.
By PRNigeria
PRNigeria encourages institutions to be transparent in their information management as it provides news items from authoritative sources for free use by the media 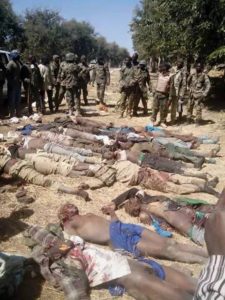 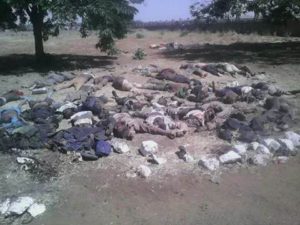 Corpses of terrorists after aerial attacks and ground troops operation