..NEMA continues to assess affected communities
Emir of Mubi, Alhaji Abubakar Isa Ahmadu, has appreciated the Federal Government for the restoration of security in his domain and called on his subjects that were displaced by the insurgency to return home. This is even as NEMA continues to assess damaged communities including Mubi.
Speaking in his palace when he received a Federal Government delegation led by the Minister of Youths Development, Mr Boni Haruna, the Emir advised his people to be vigilant and law abiding and assist the government towards the maintenance of security in the area. He urged returning residents to give all the necessary cooperation to National Emergency Management Agency (NEMA) assessment team as they go round to conduct assessment. He thanked the President, Dr. Goodluck Jonathan  for his concern about the condition of the displaced people and his assurances of support  to assist them return to normal life.
The Youths Development Minister said his visit with the NEMA team was to assess the return of peace in the area and to convey the assurances of President Goodluck Jonathan to support the returnees through the National Emergency  Management Agency (NEMA) to settle back in their homes. The Minister said the commander of the Army Battalion based in Mubi had assured that the soldiers have cleared the town and made it safe  for law abiding citizens to return to their homes.
Leader of NEMA assessment team, Musa Zakari, said the Director General of the Agency, Muhammad Sani Sidi has directed them to carry out the assessment for immediate deployment of necessary support for the returnees to start  rebuilding their lives.
The assessment team met with a returnee, Mr Bitrus Yohana and his family of ten, who came back after several months of displacement. Mr. Yohanna appreciated the Federal Government and the military for the restoration of security in the area. He as well as other formerly displaced persons now back and trading in Mubi Market, called on other displaced persons still taking refuge elsewhere to return home. The team has visited Hong, Maiha, Uba, Mubi and Gombi local government areas.
The Minister and NEMA officials also visited Mubi market where business activities have picked up and other places that included the Adamawa State University and State General Hospital.
It would be called that Mubi was at one time renamed by  Boko Haram.
Sani Datti
Snr. Information Officer 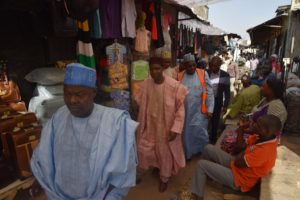 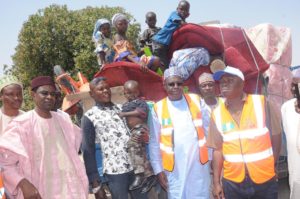