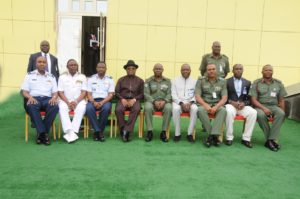 Military operations in Nigeria may soon begin to enjoy popular supports as critical stakeholders have begun to donate to the upkeep of the internally-displaced persons(IDP) in the northeast. Ebonyi State Governor, Engr Dave Umahi this afternoon committed to give bags of rice and other essential items to the IDP and the troops in the contested area.
The governor made the commitment when he paid a courtesy visit to the Chief of the Defence Staff (CDS), General Gabriel Olonisakin, noting that for the Nigerian Armed Forces to win the war against insurgency in the northeast it is imperative for all and sundry Nigerians to give them their support and encouragement. Governor Umahi said that in addition to individual and corporate supports, the military would also require the general public to champion the campaign of effective isolation of the terrorist elements in that corner of the country.  The Governor also used the occasion to commiserate with the CDS and families of those gallant soldiers who paid supreme sacrifice in defence of fatherland.
Responding, the CDS, thanked the Governor for his pledge and encouragement and assured him that the presidential order to end the Boko Haram violence before the end of the year is a task that must be done, adding that the military has gone back to the drawing board to actualize that mandate.
Similarly, a delegation of top officials of the United States government led by Brigadier General Donald Bulduc, Commander Special Operations Africa and the U.S Ambassador Don Mozena, Coordinator, Department of State, Counter-Boko Haram visited the Defence Headquarters and pledged American support  in the ongoing fight against terror. He said that the visit was a follow-up to President Buhari’s earlier visit to the United States.
Colonel Rabe AbubakarActing Director Defence Information